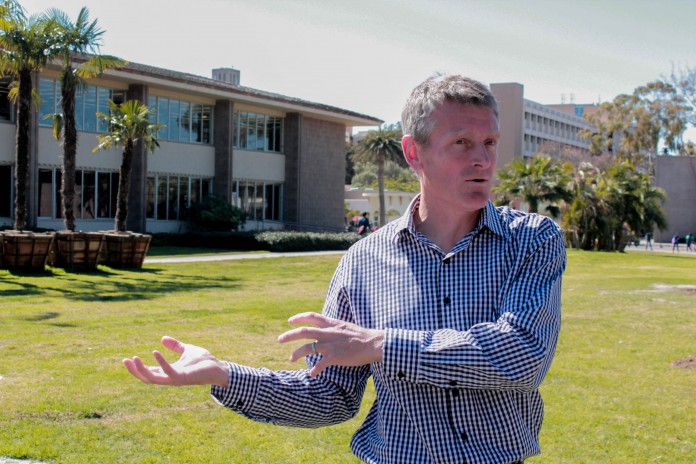 The University of California, Santa Barbara’s own Davidson Library is on the verge of embarking on a major two and half year renovation project. The project will cost an estimated 71 million dollars and is set to begin the first stage of construction this coming June with a time table lasting until September of 2015. The notable new features will include a grand three story paseo entrance, the renovation of the eight story tower to meet modern seismic code, a new three story building, an addition of approximately 60,000 gross square feet, the renovation of roughly 92,000 square feet, and 20 percent more study space, as well as many other distinguished amenities.

“Nothing has happened to this library in terms of construction since 1978. That’s 35 years ago. I think you can say that some kind of work in the library is long overdue,” said Mark Hartell, Project Coordinator of the Library Renovation.

According to the projects website, “The UCSB Library has not undergone any renovations in thirty-five years. During that time, UCSB enrollment has risen dramatically and revolutionary advances in information technology have transformed libraries and societies. The redesigned UCSB Library will provide critical physical spaces, professional expertise, and information resources to meet the broader goals of the University and of a new generation of scholars.”

Students won’t have to worry about an increase in tuition since the funding for the project will be completely funded by a state bond sale in the spring of 2013 as well as fundraising from private individuals, foundations and friends of the Library.

The renovation will include a massive series of changes. There will be a new sprinkler system, fire alarm system, and bathrooms. A spacious and more enticing library plaza and a great three story paseo for an entrance from the west side across from the Arbor. The two story building north of the tower will be completely gutted and refurbished with modern technology and will serve as the new Arts Library. An additional three story building will be built on the far north end and will be the new home to UCSB’s special collections. The new changes will also include new technology, more study rooms, and many more new features.

Potential concern will be the amount of noise caused by the various forms of construction as well as the potential problem of the interaction of construction trucks and hurried student bicyclists.

“One thing that I am concerned about is that the library is right in the middle of campus and this construction is going to be loud. What if people have classes and they are disturbed because it’s loud outside? What if students are studying late at night at the Davison Library, like pulling an all nighter, but they can’t study because it’s loud from all the noise?” said France Gonzaga, third-year communication major.

This concern has been heard loud and clear by those in charge of the renovation. The busiest construction hours will be conducted at night, during breaks, and especially during the summer. Hartell says there will still be noise at various times throughout the day but continuing to provide a space for students to study is still the top priority. The Davidson Library will still remain open 24/7 with an overnight study room; however the two story building will be closed off to the public.

“I’ve been here a little over a year but I’ve realized that this library is possibly more important to students than other campus libraries because of the unique features of this campus and the fact that IV can be such a difficult place to work and study, so we realize that people come here because it’s a quiet and safe place to study as well as to use the collections and that’s why we found a way of keeping the library open 24/7 throughout the project,” said Hartell.

“I think the construction is a kind of a bummer but in the end I think it will be worth it,” said first-year double major in philosophy and language, culture, and society Sierra Markee-Winkler. I mean it has to get built somehow and there is never enough outlets in the library. It’s pretty exciting to get an upgraded library. We are pretty lucky that they are doing that.”

For more information about the Davidson Library renovation check out the library’s website, http://www.library.ucsb.edu/building