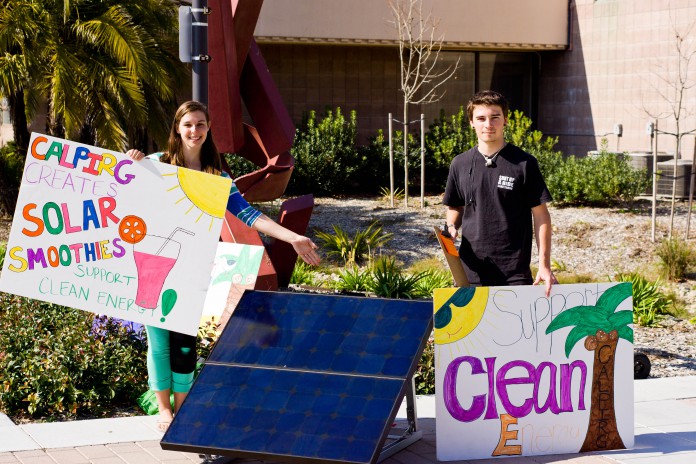 The University of California, Santa Barbara chapter of the California Public Interest Research Group, better known as CALPIRG, was out in the Arbor handing out smoothies last Tuesday and Wednesday, Feb. 6 and 7. But these smoothies were special. They were made by the sun.
CALPIRG,  student-directed non-profit that works to fight for the public interest on issues that affect everyone, was able to set up a solar panel system that provided power from the sun to run a blender that produced smoothies for students passing by. This innovative rig was all in an effort to get students to sign a petition that would be sent to the state legislature. This petition would urge the state government to improve the Million Solar Roof Initiative to three million. In 2006, CALPIRG was able to get the initiative passed that would ensure that one million roofs in the state of California would be solar by 2016, and now they want to increase it to three million by 2020. CALPIRG organizer Kat Lockwood said that this statewide effort to get legislature to hop on board with the initiative.

“Since we are the UCSB chapter, we are working to target our local elected officials as our chunk of the broader effort,” said Lockwood. “Here at UCSB we have about 5,000 student members who pledge and become CALPIRG members.”

California leads the nation in solar and clean energy producing 20 percent of its overall energy from alternative clean energy sources. However, CALPIRG would like to raise that statistic. This smoothie handout is only one of a couple ways in which they will try to get UCSB students to join the fight, another being a solar powered concert that is being scheduled to take place later this quarter.

First-year undeclared student Sebastian Irani, who signed the petition, believes that the passing of the new initiative could greatly benefit California as well as UCSB.

“I think that UCSB could use this to install solar panels around campus, which may be expensive at first, but is sure to pay for itself over the course of time as well as cause the school to start to go even greener,” said Irani.

In November of 2012, Californians passed Proposition 39 that would collect millions of dollars to fund energy related products, and CALPIRG hopes to get a cut of that fund to make solar power cheaper. All they need to do is get state legislature to see that the citizens want it.

“In total we have 1204 petitions so far that we just delivered Thursday morning to Hannah Beth Jackson’s (State Senator) deputy district director,” Lockwood said.
Third-year sociology major Megan Foronda agrees with Sebastian and thinks that the panel plan would be fantastic for UCSB.

“UCSB has always been advocates for environmentalism,” said Foronda. “The modern environmental movement began at UCSB. Such historical advocacy is a point of pride for UCSB, so I think the installation of solar panel roofs would only continue the legacy UCSB has with this step toward a more sustainable, environmentally conscientious future.”