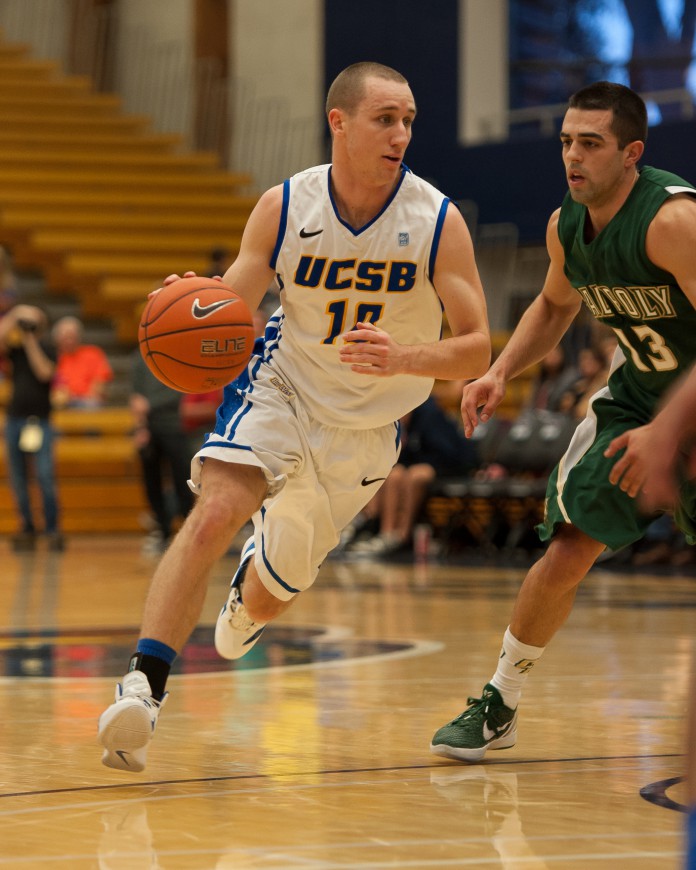 This season we have a young but extremely talented men’s basketball team. Guard Nate Garth is the only senior on the team that includes an astonishing nine freshmen. It’s true our record is a not-so-impressive 7-13 and 3-6 in conference, but we have gobs of talent and I believe we’re on the brink of piecing it all together just in time for the part of the season that really matters.

If you went to the Saturday, Jan. 19, Cal Poly game, then you know what I’m talking about. Students went absolutely ballistic and would most likely agree that it has been one of the greatest rivalry games University of California, Santa Barbara has had in a very long time. It was an absolute thriller and it took double overtime, an ignored rogue fire alarm, a gutty performance from our bench, a huge Taran Brown three-pointer, and some clutch final buckets from a heroic Kyle Boswell for us to finally tromp the nagging ponies.

“The Cal Poly game being a rivalry game and TV game, everyone just wanted to get the momentum flowing again and trying to get a winning streak,” said third-year guard, Kyle Boswell. “So we just came out with a lot of energy. The stakes were high. We wanted to get to .500 in league. We basically came to play. Our guys fought and so did they. Every year I’ve been here, it’s always a close game. It comes down to the wire. Cal Poly is known for kind of grinding it out.”

When asked about scoring the final six points of the game to catapult the team to a victory, Boswell said, “We hit some big shots. Taran hit a big three to go into overtime and then I hit a few big shots to help us get a victory, but the team effort was unbelievable. We came together as a unit.”

The sole downside to the amazing Cal Poly game was that the team lost the leading scorer and charismatic big man, “Big Al Williams.” Second-year power forward Al Williams went down hard early in the game and is said to be out indefinitely with a hamstring tendon injury.

If you missed out on the Cal Poly game and want to get into the action before the season ends, do so and take hope from the fact that we have five more home games before the all-important Big West Tournament. Don’t let the record deter you from coming. There are plenty of games left to turn the season into a memorable one. It’s true we don’t have current Indian Pacer and former Gaucho great Orlando Johnson this year, but we do have a boat load of young athletic players that are gobbling up experience with every game.

We have three point assassins, led by the man for whom we chant “Boswell Shoots well.” We have size and it matters. We have a very dominant big man in Al Williams. We have an excellent coaching staff led by Coach Bob Williams, who is in his 15th year as the UCSB head coach and has earned an amazing 237 victories as a Gaucho. Last, but certainly not least, we have camaraderie, leadership, and an uncanny desire to win. It can be seen in the eyes of the players and the way they cheer for each other on the bench.

“Literally everyone is friends with each other and it’s really special to have that,” said Boswell, commenting on the team’s chemistry and leadership. “It comes on the court, too, when you’re sharing the ball or when people are excited for another player. When your bench is excited for the starters, and when you come together as a team to win the game, it’s something special. So many people have stepped up. Alan, T.J., Nate, myself, but it’s more of a joint leadership.”

The next home game is on Thursday, Feb. 7, against University of California, Davis. In spite of the losing record, we are 5-4 at home, and most of those home losses have been really close. There’s a huge advantage to our team when they play in the Thunderdome and so much of it depends on whether students come out and support their basketball team. This is the time do so.

“It’s always nice playing at home,” added Boswell. “Our fans come out and support. People come out and we just have a good time. I feel like there’s something special about it. When we pack in the Thunderdome, it gets pretty loud in here. It’s a special environment.”

Activision Blizzard Buys Itself Out for $8.2 Billion