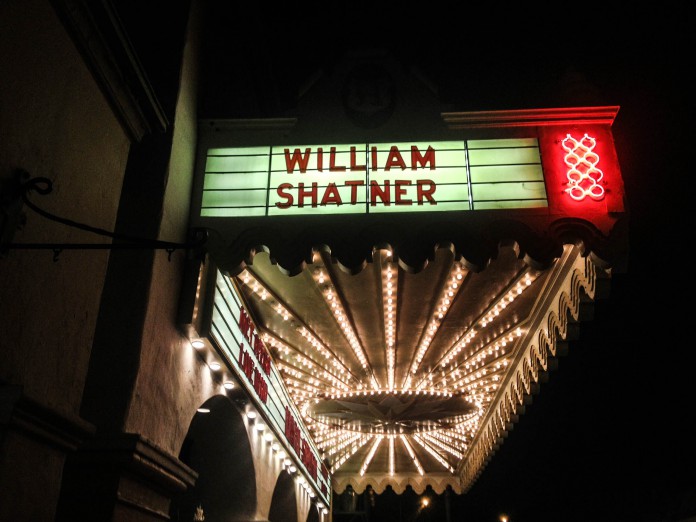 In what may be the final frontier of a lifelong career of impeccable success, William Shatner’s new show “Shatner’s World: We Just Live In It” premiered at the Arlington Theater in downtown Santa Barbara on Jan. 18. The space-venturing actor, musician, writer, and director’s performance focused on his own established persona, drawing heavily on his interpretation of Captain James T. Kirk and mixing comedic life experiences and anecdotes that he has developed into an act that brought the audience into his own personal world.

As the lights dropped and the all too familiar Star Trek theme began to play, and the sound effects of the teleportation beam whirred, Shatner interrupted and came onto stage shouting: “No, no, no, no beaming in—you said I can make an entrance with a rocket strapped to my ass!” This entrance was only the beginning to a high-energy evening, where amidst various anecdotes, sound bytes, and quips Shatner made a slew of self-deprecating jokes about his age and how the years have affected his looks.

Much of Shatner’s performance and humor derived from his acceptance of himself as an American icon, and a representative of a galactic cultural phenomenon. For instance, Shatner said during his act, “[the] American Film Institute asks me to do the opening act to a George Lucas retrospective…and I say, “What’ll I do?” And they say, “Well, you know, you’ll come out, get on stage…and, umm, they’ll laugh.” This sort of self-aware approach to getting laughs from the audience is exactly the sort of clout that Shatner has built up over the years and uses to his advantage.

It is arguable that Shatner’s entertainment appeal is rooted from a long career of stage acting.  Before his time spent on the original “Star Trek” series commanding the USS Enterprise from 1966 to 1969, Shatner was already a seasoned classical Shakespearean actor, and began performing for the Stratford Festival of Canada in Ontario, Canada in 1954. Within the next few years, he made his Broadway debut in such productions as Christopher Marlowe’s “Tamburlaine the Great” in 1956.

Despite his great success playing the role of Captain Kirk during “Star Trek,” Shatner faced economic hardship during the early 1970s. However, due to the cult following that had accumulated by then among Trekkie fans, he was quickly elevated to become a distinct cultural icon. This success proved to be a saving grace for his economic troubles.

As he reminded everyone with his performance, Shatner’s talent has definitely led him on a journey that rivals some of the greatest heroes he has played in film and television. At 81 years old he continues to entertain the masses with his unique personality, proving in every sense of the phrase that he has certainly “lived long and prospered.”