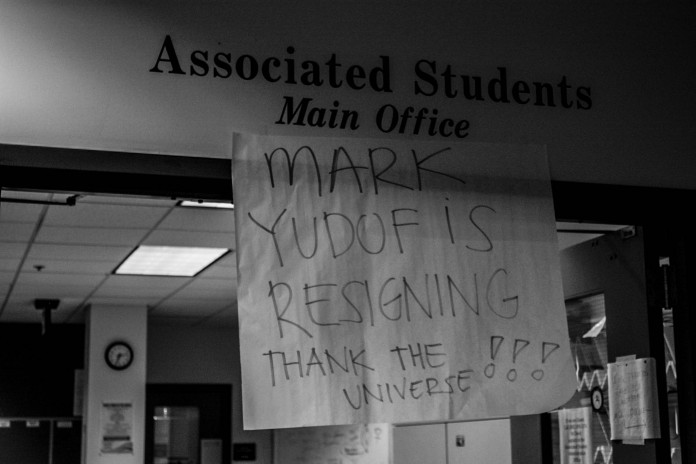 When I heard the news of our University of California President Mark Yudof’s resignation, I was in my kitchen taking inventory in preparation for our upcoming presidential inauguration (I lead an unexciting life, celebrate Inauguration Day like Americans celebrate the Super Bowl, seven layer dip and all. And why not when seven layer dip is involved?). My initial reaction to the resignation was disinterest. The UC Office of the President, like my life, is relatively unexciting compared to the title. Though the president is a member of the Board of Regents and actively works with the state legislature on issues relevant to UC, he can’t do much without approval from the board and, in terms of enumerated powers, doesn’t rank much higher than a UC chancellor. If Chancellor Henry Yang were to resign, it would create a fissure in the earth’s crust where Storke Tower stands and a sudden die-off of puppies in Santa Barbara County. This is because Chancellor Yang is the only reason we live in paradise. Yudof’s resignation probably registers a 2.3 on the Puppy Endangerment Scale: felt slightly by a few people, but no damage to buildings or gas lines.

Yet my second reaction was that of conspiratorial distrust. Part of this has to do with the fact that a successor has not been mentioned. Yudof’s predecessor Robert C. Dynes announced his resignation eight months before Yudof took over. It could be until the next fall quarter before we hear any talk of Yudof’s successor. And anyone who claims to be a government conspiracy theorist knows that during a time when, for the first time in the state’s history, students pay more money than the state to keep the UC system afloat, one does not spend eight months drafting a shortlist. One government conspiracy theorist might also notice that Yudof began his term right before the Great Recession, effectively turning Yudof into a “wartime UC president,” constantly brawling with the legislature to work out a budget plan. The fact that he is leaving now suggests that the war is over. Yudof hints at this in his resignation letter, “this also [in addition to “taxing health issues”] appears to be an apt time for the University to bring in fresh leadership.” But the coin flips both ways on this one. Either the war is over and Yudof is playing Cincinnatus: returning to private life after taking the reigns of power and saving a nation where others would grow drunk with power, or the war is about to get worse and he’s playing Neville Chamberlain: resigning the prime ministry before he gets blamed for letting Hitler take over Europe, but keeping his Nobel Peace Prize behind bulletproof glass.

But I am not a government conspiracy theorist. If I were a true conspiracy theorist I would probably say that Yudof’s resignation was an attempt by aliens to increase oil prices. I will say however that Yudof became UC President around the same time Barack Obama became President of the United States. Obama, when he speaks before the nation on Jan. 21, is not expected to make the same “change is coming” pitch that got him elected in 2008. After doing battle with Congress for four years President Obama is emerging with battle scars and grey hairs and comparatively little to show for it. “Change is coming” doesn’t cut it anymore. Mark Yudof faced the same dilemma, working to compromise with a hostile legislature without letting we the students suffer for it. In that role, Yudof did more for us to prevent crushing tuition hikes than President Obama did, and with fewer enumerated powers to boot. Though his public image frequently shifted between benevolent overlord and mafioso kingpin, Yudof showed us that compromise, with a dose of sacrifice, is possible. Instead of having to put in another four years duking it out with legislators, he has earned the right to leave on his own terms. It also means that we don’t need to fear whomever replaces him.