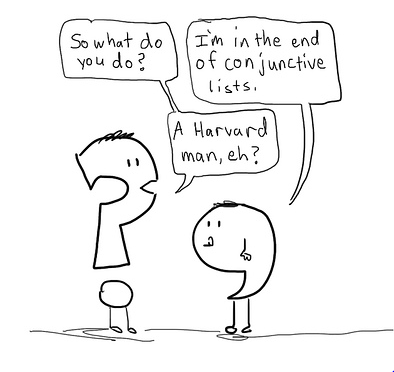 I care about grammar. Probably a little too much, but that’s a discussion for another time. I find tildes titillating, semicolons scrumptious, and dashes, well, dashing. Grammatical errors irk me, and while my writing and speech are most definitely not free of them, I have made it my job to eradicate poor grammar from the University of California Santa Barbara (but actually, that’s my job). Unfortunately, as the copy editor of The Bottom Line, I am also forced to eradicate one more thing—the serial comma.

The Oxford, Harvard, or serial comma—call it what you will—is used right before the conjunction at the end of a list. The infamous example of “we invited the strippers, JFK and Stalin” illustrates the main problem with neglecting to add a serial comma to a sentence—it can transform politicians into exotic dancers. Craig Cotich, co-director of the editing minor under the Writing Program at UCSB, says, “I think the best reason to use the Oxford comma is to reduce ambiguity.” I think we can all agree with this wholeheartedly after that mental image of John Kennedy and Joseph Stalin onstage.

While it is true that you can absolutely write clearly without using the serial comma, why bother with extra steps? Just stick a comma in there and eliminate the need for the unnecessary clarifying words that you’d be forced to use otherwise. That’s the point of grammar, to make things as clear as possible for the reader. That is also why most American manuals of style, such as MLA and Chicago, assert that the serial comma be used.

The exception to the rule is journalistic writing, like this, which is generally written in the style of the Associated Press. The aim of AP Style is to deliver news as concisely and clearly as possible, and the ban on the serial comma is its nod to that principle. Basically, it saves room to print one fewer comma in every list. But that extra millimeter cannot possibly be as valuable as the consistency and clarity that the serial comma brings in. I know—this is blasphemy—but hang in there.

So what would happen if we brought the serial comma into journalistic writing? For one thing, it would make my job easier. Removing commas and reformatting those sentences so that they convey the point unequivocally takes time away from other things I could be doing, such as checking articles for spelling errors or posting too many cat videos onto Facebook. But in all seriousness, the serial comma just makes life more pleasant. It’s not necessary, but it’s also not worth leaving out.

“Overall, most sentences without the Oxford comma are perfectly clear,” says Cotich. “And in most cases, readers understand what the writer intends. There are, however, many cases where the lack of a serial comma leads to misunderstanding. For that reason, I think it’s easier to make it part of your writing practice.”

With the benefit of clarity and the added bonus of more time to not be thinking about commas, there is lots to love about the serial comma. Instead of risking more accidental mental visuals of world leaders as strippers, let us all agree to adopt the serial comma into our writing style and put the issue to rest.