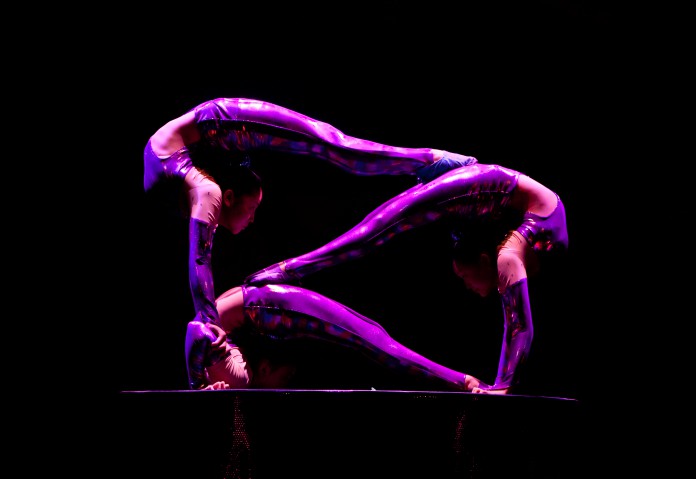 A multitude of orange balls, unicycles missing their seats, and chandelier-like objects made of water-filled shot glasses balanced on glass plates were only a few of the eclectic items used at The Golden Dragon Acrobats’ performance titled “Cirque Ziva,” which took place on Jan. 26 at University of California, Santa Barbara’s Campbell Hall. The group of athletes, actors, and artists average 200 performances a year, and have presented in all 50 states and over 65 countries.

The collective performance and each individual act combined acrobatic feats with props and a spectacular wardrobe inspired by the group’s home country of China. The various elements were incorporated in innovative and breath-taking ways that clearly demonstrated the passion and dedication the performers have for their craft.

Each performance was a challenge to the human body’s ability to bend and a question of its strength. One performer contorted her body as she balanced a shot-glass chandelier upon her feet, hands, and face while rolling, rising, and spinning without spilling a drop. Another dribbled orange balls between her hands and feet while lying on her back, and bounced it up a pole to drop it into a basket. A few acts later, an acrobat climbed on top of four chairs precariously stacked 30 feet high, only to hold himself in place with a single hand.

Pure acrobatic talent and gymnastic finesse was the backbone for “Cirque Ziva,” proving that the members were not only grand actors and performers, but also talented athletes and contortionists. A group of ten or so men jumped, twisted, and leaped through a large ring raised higher and higher from the floor, all the while doing cartwheel, handsprings, and flips. Acrobats jumped from one spinning unicycle to another with ease and grace, and nine people nimbly jumped aboard a moving bicycle. They juggled hats and balls, made intricate towers with each other’s bodies, and tossed diabolos, which are juggling props composed of a hourglass-shaped spool wirled on a string.

While the performance itself was astounding, students from UCSB may have been confused by the face painting, balloon animals, and dozens of children running around outside of the Hall. “Cirque Ziva” was put on in accordance with the Arts and Lectures’ Family Fun Series, which holds children-friendly entertainment to appeal to families around the Santa Barbara area. Noel Henry, the Events Manager for the Arts and Lectures series, said that the children shows are some of their most popular events.

“We have quite a few shows left this year for children,” said Henry. “They’re always on Saturdays around 3 p.m. We always have a social before all the children’s shows just for all the kids to be able to have fun. All the kids shows always sell out. We never have tickets the day of.”

The events are usually sponsored by members of the community who aim to make the series more accessible and feasible. Tom Kenny, a UCSB graduate and sponsor of the event, said he’s attended many of the Family Fun Series shows and was happy to help sponsor “Cirque Ziva.”

“We’ve really gotten behind the children’s program,” said Kenny, “so each year now we choose a venue we connect with and then we contribute to help make it work.”

Kenny said “Cirque Ziva” offered an opportunity for the children of Santa Barbara to see something to unique and rare in the area.

“It’s something different,” said Kenny, “that you don’t see come through Santa Barbara very often, and our daughter loves stuff like this.”

The Arts and Lectures Family Fun Series continues in February with a “Brown Bear, A Moon, and A Caterpillar: Treasured Stories by Eric Carle” and will run until April.