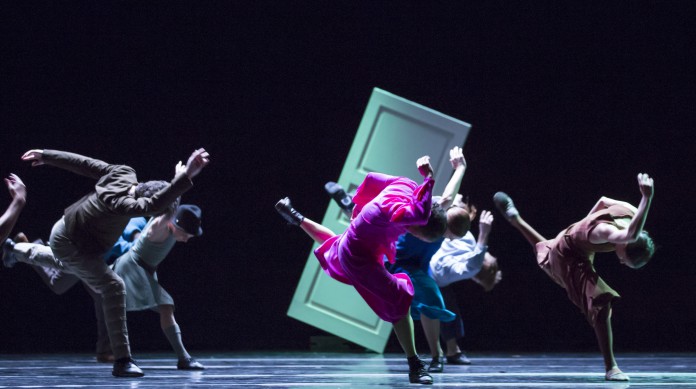 Lightning may not strike twice in the same spot, but thankfully, Hubbard Street Dance Chicago does. The renowned dance company returned to grace the Granada Theatre stage on Jan. 23, with a strong program of choreography that solidified the company’s place at the forefront of innovation in contemporary dance. University of California, Santa Barbara’s Arts & Lectures’ unusual scheduling decision to invite the company for a second consecutive season is a testament to the tremendous acclaim Hubbard Street received from its Santa Barbara audience last year.

Hubbard Street presented pieces by three choreographers that highlighted different choreographic approaches to modern dance. Of particular note was “Untouched” by Aszure Barton. Barton worked individually with the dancers to create a dance where performers populate a surreal world of movement. The work brilliantly combined strong lighting choices, evocative stage design, and elegant costumes with powerful choreography. Unified by a coherent artistic vision, the piece was satisfying both aesthetically and intellectually.

Company dancer Kellie Epperheimer, who taught a master class at the UCSB Dance Department, noted that a dancer “is the paint but also the painter.” This ethos was evident in the performance, where the strength of the choreography was amplified by the intelligently visceral quality with which the dancers imbued their movement.

The dancers’ secret to executing the choreography’s devilishly tricky steps with deceptive ease and aching beauty lies in the extensive hours of rehearsal the dancers put into preparing the work.

Artistic Director Glenn Edgerton noted in a post-performance discussion with the audience that while there may not be a clear narrative or easily discernible “meaning” in the dances, there is certainly clear vision involved. He shared that the choreographers often rely on imagery to evoke a certain feel to the movement, rather than directly telling the dancers what they should represent. The dancers then embody this imagery in their execution of the steps.

“Dance can get bland without that input,” Edgerton said, adding that “hopefully it involves your imagination as well.”

The closing work, “Casi Casa,” certainly ignited the audience’s imagination. Choreographed by Mats Ek, a leading Swedish choreographer, the piece explored life within the home and rifts that can develop in domestic relationships. Staged with smart humor and inventiveness, the dance invited viewers to reflect upon ways in which individuals living under the same roof can connect or alienate themselves.

This year marks the 35th anniversary of Hubbard Street Dance Chicago, and the company has grown to include a wide range of repertory. In addition to staging works by established choreographers, Edgerton is putting the spotlight on the next generation of dance makers. He provides his dancers with opportunities to choreograph for the company, noting that his goal is to be “at the next step where dance can be.”

That intention was indeed evident in the company’s performance, and it will be thrilling to see what innovation the company will bring when it next visits Santa Barbara.