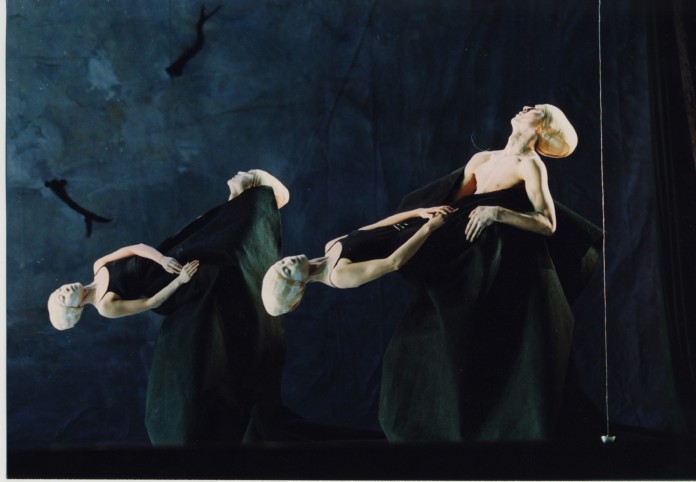 Shen Wei Dance Arts treated Santa Barbara audiences to a visually stunning and viscerally gratifying dance experience when they performed at the Granada Theatre on Nov. 28.

Shen Wei Dance Arts is a truly distinct and innovative company that synthesizes Eastern and Western aesthetics to craft images of singular beauty and transcendence. The company was founded in 2001 by Shen Wei, an internationally celebrated and renowned choreographer. Wei, a recipient of the MacArthur “Genius” Fellowship, was featured as the lead choreographer for the opening ceremonies of the Beijing Olympics. Wei’s choreography reflects a multicultural exchange of ideas, incorporating influences of Chinese traditional culture, American modernism, European surrealism, and elements of ancient drama.

The company presented two pieces at the Nov. 28 performance, “Rite of Spring” and “Folding.” Both showcased Wei’s masterful ability to craft complete worlds onstage that are governed by their own rules, and that the audience feels privileged to be privy to.

The “Rite of Spring” was a complex dialogue of movement and music, set to Stravinsky’s infamous score. The piece featured exploration of the concepts of space and energy as they impact and propel relationships onstage. The second piece, “Folding,” was a visually mesmerizing experience. It was not merely a dance piece, but also a convoluted drama that engulfed the audience in its own primal and eternal universe. “Folding” reflected the influence of Chinese opera, which Wei studied while growing up in China.

At the post-performance talk organized by University of California Santa Barbara’s Arts & Lectures, the dancers shared with the audience their experience of performing works that require a trifecta of physical, mental and spiritual commitment.

“The more we invest in the world onstage, the more it becomes palpable to the audience,” added dancer Cecily Campbell. Wei’s choreography demands that the audience also become invested in the internal life of the dance, allowing for the piece to develop in a spirit of gradual gratification.

The dancers shared that a lot of the movement was extracted from extensive improvisation sessions. Wei is constantly looking for something new, whether that be a particularly transfixing hip weight-shift or an unusual spatial relationship that has not been seen before.

The specificity of the choreographer’s vision demands complete faithfulness on the dancers’ part. Yet within those limitations, the dancers emphasized that they can find freedom.

“Shen Wei has a good way of setting up limits,” shared company dancer Evan Copeland. “[Yet] within these limitations you can transcend yourself.”