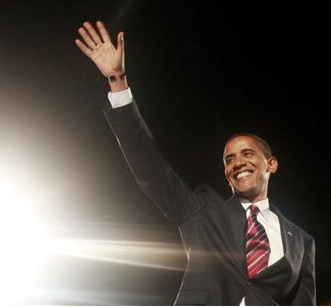 It seems that most people around the world have received the news of United States President Barack Obama’s re-election positively, according to British newspaper The Guardian.

The Guardian collected the positive and negative comments on Twitter from all over the world, and used them to design a map featuring green points representing favorable comments and red points for negative ones. The map shows that there are significantly fewer red points worldwide.

“A survey taken a couple of weeks ago showed that most countries around the world preferred Obama [to] Romney,” said University of California Santa Barbara global studies professor Mark Juergensmeyer. In his opinion, President Obama won the foreign public opinion debate because of his ability to make compromises in order to get things done.

“Around the world Obama is viewed as more conciliatory, cautious and more open to cooperating with other countries than Romney would be,” said Juergensmeyer, who is also the director of the Orfalea Center for Global & International Studies at UCSB. “Most of Romney’s foreign policy advisors were the same people who were advising George W. Bush in the previous administration.”

At the same time, China was experiencing political change with the reorganization of the Communist Party, whose leaders have been appointed for the next 10 years. Xi Jinping become the next Chinese President without the use of polls. According to the director of the Observatory of Chinese politics in Beijing, Xulio Ríos, Obama’s re-election is not bad news for China. “Although probably a different result wouldn’t affect…Chinese politics,” he said.

Ríos also said that although managing its domestic problems is China’s priority, relations with the U.S. still play a key role.

“The relations with the U.S. will keep being a key issue marked by the mutual distrust to strategic partnership. The more nationalist the Chinese project is, the more reluctance it produces in Washington,” said Ríos.

The United States is in a similar situation right now with the growing importance of its internal problems. Alison Brisk, a global studies professor at UCSB, also commented on this issue.

“In general, foreign policy will be less of a priority…[U.S. policy will be] oriented towards pacifying existing U.S. problems in this term, because of the fiscal cliff and other urgent domestic problems,” said Brisk. Brisk said that it’s in the American interest that this crisis comes to an end and that the specific roles of the re-elected president become increasingly important.

“Obama does tend to seek multilateral solutions to issues like the global economic crisis, so we will certainly be talking to Europe about that,” Brisk said. “But the U.S. has less and less strategic interests in Europe, and even our trade relationships are tilting towards the Americas and the Pacific.”

Concerning the future foreign policy, Professor Juergensmeyer doesn’t think that “there will be a great change in the U.S. foreign policy position, which has been pretty cautious under Obama.” Even democracy promotion around the world wouldn’t be a key issue during the new term.

“I think generic democracy promotion and diplomatic criticism of crackdowns on political dissidents will continue, but I don’t foresee much increase or strengthening of U.S. sanctions or conditionality on specific regimes that chronically violate human rights,” said Brisk.