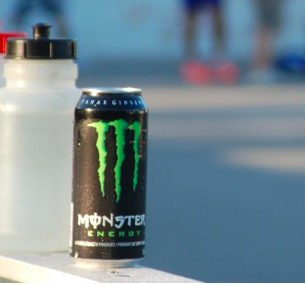 College students may not think of caffeine as a drug, but it is, in fact, the most popular psychoactive drug in the United States. Many companies have discovered appealing ways to flavor and package caffeine, and many of these techniques target young people.

Over the past three years, the Food and Drug Administration has received five reports of caffeinated drink related deaths. These adverse event reports are not confirmed allegations; in fact, according to a National Public Radio article, the FDA does not normally release adverse event reports. However, Kevin Goldberg, a lawyer representing the parents of Anais Fournier, a minor who died from heart arrhythmia, requested they use the Freedom of Information Act and released them to the New York Times, sparking unfortunate publicity for energy drinks, Monster in particular.

The 14-year-old girl’s parents are suing Monster for failing to provide an adequate warning of the risks of consuming the drink. The girl drank two 24-oz. cans of Monster in the span of two days, a decision that, according to the coroner, aggravated an underlying heart condition. Monster and similar caffeinated drinks contain about the same amount of caffeine per ounce as coffee does, but when consumed in high doses, they can be risky for people with heart conditions, pregnant women and children. Monster does indeed put a label on its drinks warning children and people who are sensitive to caffeine not to consume their drinks.

Monster denies a connection between the girl’s death and consumption of its product. Spokeswoman Judy Lin Sfetcu said Monster was “unaware of any fatality anywhere that has been caused by its drinks.” In addition, the company expressed sympathy for the family’s loss.

Caffeine toxicity, which was determined to be the cause Fournier’s death, has been a source of debate between medical officials, regulators and companies such as Monster for some time now. John Hopkins researchers called for more adequate labels on all energy drinks in 2008 so consumers could accurately regulate their caffeine intake. One of the authors of the John Hopkins report “Caffeinated energy drinks—A growing problem,” Dr. Roland Griffiths, said not being able to track caffeine intake is “like drinking a serving of an alcoholic beverage and not knowing if it’s beer or scotch.” Last year, the American Academy of Pediatrics deemed caffeine inappropriate for developing children and adolescents, citing negative effects on young cardiovascular systems in a report titled “Sports Drink and Energy Drinks for Children and Adolescents: Are They Appropriate?” Meanwhile, Monster maintains that its beverage and Fournier’s death are unrelated.

According to the lawsuit, since Monster is classified as an “energy supplement” rather than food, it can be manufactured without regard to caffeine content. Sodas are limited to a 0.02 percent caffeine limit, but energy drinks are not obligated to limit caffeine at all. Monster lists the ingredients that include caffeine, such as guarana, but does not indicate the amount of caffeine in each can. News reported that a representative for Monster said they do not include caffeine information because “there is no legal or commercial business requirement to do so, and also because our products are completely safe, and the actual numbers are not meaningful to most consumers.”

A trial date for the case, Wendy Crossland and Richard Fournier v. Monster Beverage Corp., has not been set yet. The complaint indicates Fournier’s parents are seeking damages in excess of $25,000. In addition, Goldberg’s firm is investigating other cases that may involve Monster and similar energy drink companies.

The results of the case could be that many young consumers will be informed of how much caffeine they are consuming with each energy drink.