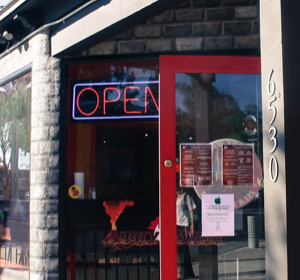 “I’m here for the Medieval Times Challenge,” I said confidently to the cashier at Angry Wings, the new restaurant next at 6530 Pardall. She looked at me with some surprise. “Are you sure?” she asked. I replied with the affirmative; I felt confident in my ability to take down 12 turkey legs in 30 minutes for a shot at my picture on the wall and an Angry Wings sweatshirt.

“Well,” she said, “they won’t be ready for another four hours.” I was perplexed. How long could they possibly take to cook? The manager had that answer for me; he showed me around back and let me take a look at one of my 12 adversaries.

And when he pulled out a turkey leg bigger than my hand and forearm, I understood why I would have to wait on that challenge for another day.

Walking into Angry Wings, customers are greeted by the phrase “We don’t cluck around.” They certainly put their money where their mouth is, too. This is the first Angry Wings location in history, and it has the task of making a name for itself in the crowded Isla Vista market that features culinary heavy-hitters like Giovanni’s and The Habit. However, Angry Wings distinguishes itself through the confidence that their wings are the best around.

When it comes to the wings, there is little leeway. Bone-in only, and there are four levels of spice to choose from: mild Buffalo Wings, medium Angry Wings, hot Habanero Dreamin’ Wings and Solar Flare Wings. There is a good assortment of dipping sauces, but as for the wings, those are the only options. The menu features salads, burgers, fries and the rest of the usual suspects at a bar-type restaurant, but make no mistake, the wings are the stars of the show here.

Normally, this lack of variety would be disappointing; however, the first bite is all it takes to see that there’s no need for a large selection. The wings are fresh and delicious, and the sauce is absolutely excellent. Even as the spice is kicked up, there is still no sacrifice of flavor for heat. They aren’t the best wings on the planet, but there is no parallel here in IV, and they are on the same level as a restaurant like Wing Stop or Buffalo Wild Wings. For a town that could use a tad more variety in the game-day food and “drunchie” categories, this is pretty valuable.

As for the food challenges, aside from the Medieval Times challenge, they also have a Solar Flare challenge with the objective of eating six or twelve wings drenched in sauce infused with ghost chili. Put quite simply, a ghost chili is roughly two hundred times spicier than a jalapeno. And the kicker is that you can’t be over a 0.08 percent BAC to participate. You have to sign a death waiver before you can begin.

They should be calling this place “Sadistic Wings.”

All in all, Angry Wings puts on a pretty impressive show for a new franchise. There are some hiccups to be sure; there seems to be a bit of disorganization as the restaurant gets finished being put together, but that is forgivable for a rookie establishment that is still stretching its wings. However, Angry Wings makes no bones about the fact that their wings are what people will be coming to them for, and it’s a promise that they have no trouble keeping. While it may not be the absolute best food in the world, it is a solid, delicious offering to the food culture here in IV, one that should be welcomed by the students.

Just make sure to say goodbye to your loved ones before attempting one of the challenges.