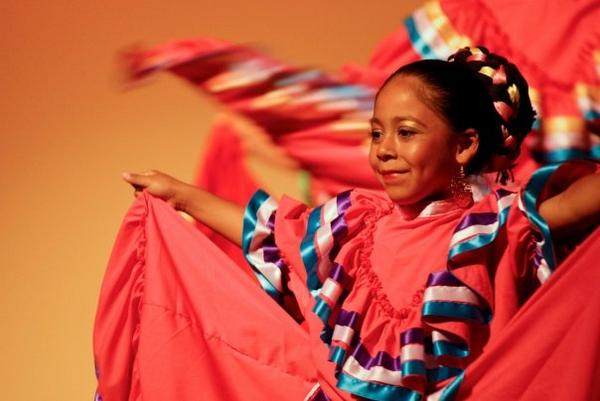 A taste of Mexico is brought by the rhythmic swirls of the Folklorico dancers’ faldas, as their majestic multicolored skirts fan the air in vibrant spirals as they glide across the stage with gracious movements in complete concordance to the music. The girls, in their red-colored lipstick, and flower-adorned hair steal the stage, until the men make their presence known with the determined stomping of their pointy boots and the big sombreros that add masculinity to their look.

This is Raices de Mi Tierra, a student-run group at the University of California Santa Barbara, which has been sharing the tradition of Mexican folkloric dance for over 20 years.

The group dances to music from various regions of Mexico, such as the popular Mariachi from Jalisco and Veracruz’s Jarocho, among others. The outfits vary by region as well- the layered skirts depict each state in their flowered patterns and diverse colors, just as the men’s shape and size of sombreros change according to each new region. The spectator is virtually taken on an exciting trip through Mexico, experiencing the best of its culture. For the dancers themselves, the folkloric performances bring them closer to their native culture.

Valdez, who has been a member of the group for three years, also enjoys the variety that the group presents. Third-year sociology major and applied psychology minor Miguel Martinez Galicia, said that Raices has been a very exciting and rewarding experience.

“I joined this fall with no experience, but Raices has an open door policy and I have learned a lot,” said Martinez Galicia.

Martinez Galicia was prompted to join in an effort to see what Mexican folklore was all about, confident in his skills as a dancer.

“I thought it was something easy and simple,” Martinez Galicia said. “But I was wrong.”

Sure enough, Raices practices three times a week: Friday nights, and Saturday and Sunday mornings, a commitment that for many Isla Vista residents brings a constricting time frame. The practices are also very intense as many dance moves can be challenging, and the entire group must reach rhythmic uniformity. But Martinez Galicia, like many of his fellow group members, was not discouraged. Instead, the students have found further motivation in the very challenges presented before them to ultimately bring a piece of their Mexican roots to the Santa Barbara community.

This year, Raices’ annual show will be held in Campbell Hall on Saturday, June 2 at 4 p.m., and tickets have already gone on sale- $10 for adults and $6 for kids, but door prices will rise to $12 and $8, respectively. Three of the regions that will be performed this year include folkloric dancing from Sinaloa, Sonora and Tamaulipas.

Raices de Mi Tierra has put tremendous time and effort into this upcoming show, as it is the complete manifestation of their year’s work and the embodiment of the rich Mexican culture they so proudly embrace.