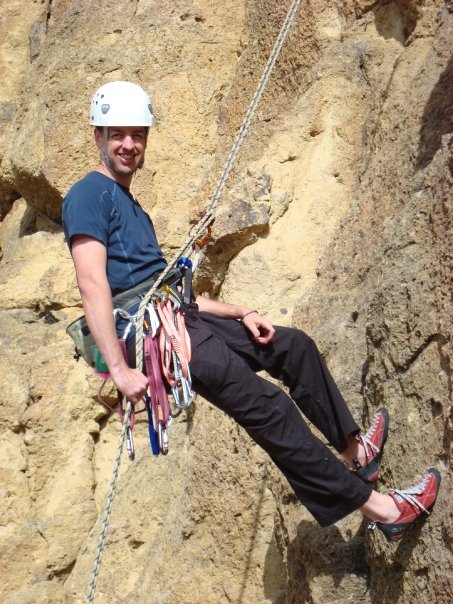 The competition was open to all students, faculty and community members with multiple levels of climbing ability and consisted of six divisions: males and females were split up, and within those subgroups were beginner, intermediate and advanced divisions. Roughly 40 competitors in the whole competition took on the challenge of completing the designated 16 courses, which were specifically designed so that the competitors could only use the color-coded route or the crevices in the wall to reach the top. Anything else resulted in deductions in the final score.

“The competitors seemed to really like the routes we had set this year. I think the climbing competition has become an annual expectation now,” Jace Swank, the head route setter and a rock wall supervisor and fourth-year student, said. “People look forward to it throughout the year. I know I have been excited for months now. It’s really great to have all the people that make up our local climbing community all come in on one day at one time to climb, hang out, and have some fun, along with a little friendly competition amongst each other.”

Belayers from UCSB’s Adventure Program acted as judges for the event, and other staff members belayed for the competitors on all 12 ropes for the 16 different routes. A belayer is the person at the bottom who is in control of the rope, and can easily hold the entire weight of the falling partner without much effort. It is a safety precaution so that the climber does not fall very far if they lose grip while climbing.

Climbing the walls was no joke. Audience members could visibly see the competitors shaking in agony to try to reach for the next placement at some points. Those who could not make it cleanly up the wall, meaning that they fell off the wall at any point, were deducted points in their final score.

“After a while your arms get tired and it gets difficult because you have to maintain your balance and think what your next step is while still in the air; it is not the easiest thing to do,” said Loure Solde, an attendee and exchange student working on her Master’s in computer science.

True dedication and nothing less appeared to be imperative for the participants, some of whom had to face heartbreaking failure. The biggest disappointments were when competitors were almost at the top of the course, but were barely unable to reach or hold onto the final placement. They ended up falling off, and had to face the daunting task of starting over again.

Despite the setbacks for some of the climbers, the energy lasted the whole competition. Based solely on the screams and cheers from the audience, it was evident when someone was able to make it to the top. There was also inspiring support for those who had to attempt the courses multiple times; for example, one competitor tried fourteen times to make it up the route but still did not manage to accomplish it.

Even though it was a competition, there was a sense of community within the competitors. They would all help each other out on how to make it to the top, and they would discuss their strategies on how to defeat a hard spot on the course were they seem to be stuck at each time they encountered it. The undeniable support for those who seemed to be stuck between a rock and a hard place set the positive and motivational tone for the event.

Rachel Glago, the student marketing coordinator for UCSB Adventure Programs, was pleased with the event’s outcome.

“This year’s Top Rope Climbing Competition was definitely successful,” she said. “Everyone was enjoying themselves, whether they were climbing or spectators. It is great to see the climbing community come together, and I love watching each climber’s different techniques and approaches to the routes.”