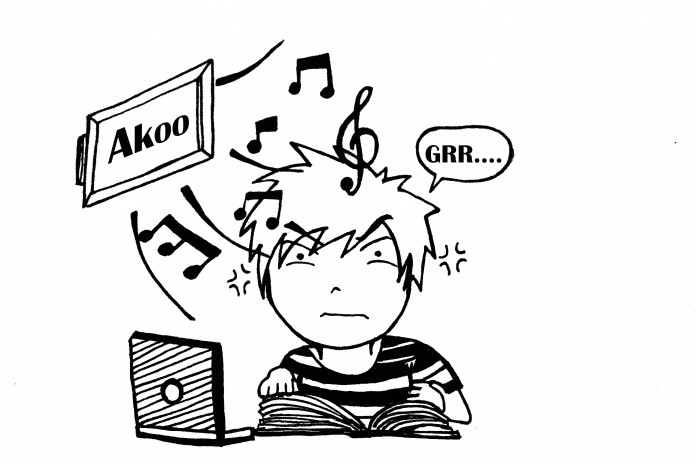 A self-sustaining parasite has clamped onto the walls of the UCen, sucking the energy out of an innocent host that longs for the approval of the students that inhabit it. Too bad that quite a few of those students don’t approve of this latest mainstream media-promoting abomination: the notorious Akoo.

The machine in question deafeningly blasts top 40 hits from Britney and Kanye like they’re the new western call to prayer, and shouts at surrounding viewers every few minutes, desperately pleading with them to send texts to it so it knows what “you truly want.” Unrelenting in its quest to bring less-than-stimulating commercial media and annoying advertisements to the masses, it continues to subject all passerby to an endless arsenal of glittery, whiny Ke$ha music videos.

I’m sorry, but this machine is “for me?” I’m not sure when I ever asked for a machine with an extraordinarily limited music selection to invade the space I hang out in between classes.

Don’t get me wrong; as a musician, I enjoy listening to many different types of music during my free time, including some of the mainstream pop Akoo plays. But music is a variable, beautiful creation that should be played at the right time and location; it’s not something that we should force upon others’ eardrums at intrusive levels, especially when they’re trying to study or have a conversation without shouting. And it’s certainly detracted from the cutesy-coffee shop atmosphere at Nicoletti’s, where I’d expect to hear some light, jazzy tunes floating over the airwaves, not Rihanna’s latest single.

Since it seems that most of the other irritated or plugged-into-my-iPod-can’t-hear-you students sitting around me in the UCen also haven’t taken advantage of the Akoo’s tantalizing “interactive qualities” and have merely chosen to try and ignore it at all costs, its entire user connectivity scheme is effectively negated.

Well, not every UCSB student has ignored the contraption. Some have gotten so frazzled by its very existence that they started a petition on Change.org that calls for the immediate removal of the eight Akoo screens located throughout the UCen. Most of those students cite their inability to study, let alone think, in the UCen as their main concern.

And they’re right: How the hell can we study in the UCen with that thing blaring in our ears? During my freshman and sophomore years, I found the UCen to be an excellent study haven. It was not quiet and stale like the library, but rather it flowed with the daily hustle and bustle of students marching through the UCen. But these perpetually chattering screens have disrupted our natural habitat for almost two years now.

Although some people’s studying may be aided by music, quite a few studies, including a recent one in “Applied Cognitive Psychology,” have shown that variable background music impairs most people’s ability to recall memorized lists. I feel like a walking example of these findings. I’ve tried again and again to do my reading in the UCen, but I always end up reading one line, getting distracted by an overly cheery announcement by an Akoo commentator, reading another line, and then getting distracted by that low-budget Foster the People music video that has absolutely nothing to do with the song. I then (usually) throw my book down in exasperated agony and find myself relocating. Meeting with study groups or project groups can be just as bad; my group members and I end up frequently zoning out at the TV, unable to concentrate on what other members of the group are saying. With the observable lack of student study spaces on campus and Isla Vista, why make the UCen an inhospitable location for those looking to study or even concentrate a little?

It’s bad enough that Akoo doesn’t actually provide a service we want, but even more importantly, wasn’t the UCen once a place we could study, chat with friends, or meet that cute guy from our Music 15 class to “compare notes?” Now the peaceful sonic atmosphere has shifted to the constant sound of a bad DJ dance party, except nobody’s dancing. The UCen is a study place, a dining place and a meeting place. Not a party place. I’m sure we all get enough of that in Isla Vista.

So let’s reclaim our space. Let’s get rid of the sneaky mass-marketing campaign that is Akoo, and kick those pesky Akoo screens out of the UCen once and for all.