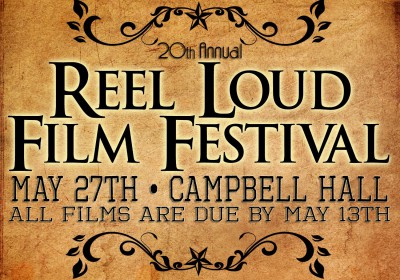 Since 1991, Reel Loud has served as the University Film Department’s primary exhibition for independently funded silent films. This year’s screening has been set to take place on Friday, May 25 at Campbell Hall, and will run approximately from 6:30 p.m. to 11 p.m.

A submission panel comprised of students and advisors from the film department met last Saturday, May 12 to appraise the films submitted for approval for the festival’s lineup. There are several key, unique prerequisites for films featured at Reel Loud, such as the requirement that all films be shot on 16mm film. They must also be silent films, must not exceed seven minutes and must include a musical or performance art component to accompany the film.

Joe Palladino, undergraduate advisor for the UCSB film department, attested that the guidelines imposed for the films, namely the requirements for usage of 16mm film and the prohibition of digital recording, present a unique challenge for the directors involved, especially considering that the films are paid for out-of-pocket.

“There’s a lot more planning that’s needed in film,” said Palladino, who has been involved in organizing Reel Loud for the last 15 years. “You have the expense of buying the film, processing the film, and then the time later of cutting it. Cutting is a core all of itself, you’re physically looking at every frame. It’s a very tactful way of filmmaking, which is something we’ve embraced for a long time. It’s exciting but it’s very difficult.”

In addition to the films themselves, the festival will include performances between film showings by popular UCSB a cappella groups Brothas from Otha Mothas and VocalMotion, as well as the performance art group What?!?. As if that isn’t enough, an art show will be staged outside Campbell Hall, and an as-of-yet unconfirmed live band will perform as the closing act.

Chloe Whitmus, a third-year film and media studies major and this year’s producer for Reel Loud Festival, commented on the heavy involvement of different aspects of art in the festival after the conclusion of the submissions panel.

“What’s great about Reel Loud is that it brings together all different aspects of art and performance, said Whitmus. “Not only do we have films, but live performance art and bands with the films… We integrated an art show into it. It’s a great community event where we bring in all types of art. The live acts play a big part in Reel Loud, not only in the transitions between films, but it’s something to get the audience hyped up.”

The aesthetic themes for Reel Loud in recent years have included a “vintage circus” motif and “Alice in Wonderland.” This year, the chosen theme is the “Death of Cinema,” a callback to a longstanding historical trend, where the development of cinema is decried and criticized, only to be subsequently reborn with each successive era.

“It’s very interactive, it’s deeply embedded in the history of film,” Whitmus said, commenting on the theme. “‘Cinema is dead’ is a great irony. It’s been announced dead over and over again… The irony of it is that we are yet again pronouncing dead film, and celebrating it at the same time. We’re reviving it while killing it.”

Festival Director and fourth-year film and media studies major Chynna Cruz is responsible for keeping the décor for the festival congruent for the theme. Cruz commented on the zombie and coffin motifs used in the festival’s promotional material, adding that there will be some additions to Campbell Hall during the festival, such as a banner reminiscent of Los Angeles’ Rialto Theater, and a centerpiece in the space outside the lecture hall that will feature an adult-sized coffin spewing out film reels and tape, evocative of a funeral wake.

“It’s one thing to say theater is dead,” said Cruz. “It’s different to show it.”

This year’s theme presents an opportunity for tributes to early cinema classics such as “Modern Times,” which highlights a peak in the career of the iconic actor Charlie Chaplin. Film submissions are not solely restricted to the theme, however, and together they vary in lightness and tone. They include films such as “The Archive,” a film set in World War II Germany about a Nazi official who conducts a secret mission by reading an officer’s diary, to “Trunko,” a film set to ukulele and guitar music that tells the story of a young child who befriends a corpse he finds washed up on a beach.

Ryan Ealum, a fourth-year film and media studies major and one of the music coordinators for Reel Loud this year commented on “Trunko”, remarking that “some of the strongest films are the ones with the simplest ideas.”

“It was also a little dark too,” Ealum said of the film. “It’s a pretty unique concept and I’m glad he went with it. It’s hard to direct children, that’s a task on its own.”

Cruz thinks “The Archive” will be one of the evening’s highlights, remarking that the film is dark without being overwhelming. It remains to be seen which films will garner awards from the audience, as well as a panel of judges.

Pre-sale tickets for the Reel Loud Film Festival are now available for $10 at the second floor of the SSMS Film Office. Tickets will cost $12 at the door on the day of the event.