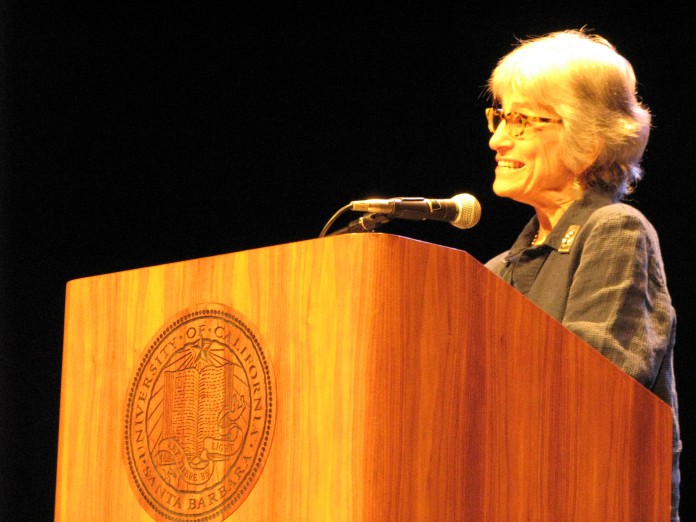 In light of the recent issues surrounding women’s reproductive rights in the United States’ current political cloud, the Walter H. Capps Center’s quarterly ethics forum chose speaker Linda Gordon to address the social and political intricacies of the controversy. Gordon, a Florence Kelley Professor of History and University Professor of the Humanities at New York University, took the floor at Campbell Hall last Wednesday, May 23, to discuss the historical and modern context of contraception and women’s health.

Her argument began with the current dispute against birth control, which stems from three main facets to contribute to the general atmosphere of “moral panic” in the United States. She claimed that not only is there an existing negative attitude against women’s rights in general, but that a dislike for President Obama also contributes to the conservative resistance for any social legislation to be passed. In addition, the push for anti-contraception and anti-abortion laws is made possible by the power of large sums of money given to promoting fundamentalist ideals.

To give the audience an idea of where the modern debates originate, Gordon broke down the extensive history of the birth control controversy. According to Gordon, it wasn’t until the 1840s that the campaign against the “immorality” of birth control began. This “immorality” referred to the woman’s evasion of responsibilities of motherhood, as opposed to the current argument that life begins at conception.

“The issue is no longer as about unruly women, but as about protecting fetuses and now embryos,” said Gordon.

Christina Orzechowski, a first-year undeclared major, attended the event after having learned about the conservative, Catholic perspective on contraception through a religious studies course. Although this course had touched on the topic of birth control, Orzechowski was glad to have heard another viewpoint.

“It was cool to hear an opposing view. It balanced out the stuff that I’ve learned,” said Orzechowski. “Learning the history definitely put things into more of a perspective.”

Throughout the course of her presentation, Gordon brought each point back to the main idea that citizenship is the derivative force behind the contentions with contraception. Her argument proposed that the issue of contraception derives from class issues, as opposed to it being a specifically gendered debate. The fundamentalist groups, Gordon reasoned, refuse to support big government in the social sphere, which reduces access to contraceptives for the working poor. However, an exploding population and the number of children born to unprepared parents has negative consequences for communities and the nation as a whole.

“Unsafe and irresponsible sex affects us all,” said Gordon.

She also highlighted a contradiction she said she found within the fundamentalist argument against contraception: while those against birth control refuse to pay for the contraception services provided by institutions like Planned Parenthood, the taxes used to pay for childbirth cost taxpayers a great deal more. Gordon explains that there remains an unwillingness of conservative fundamentalists to accept responsibility for the less fortunate through taxes for health care and related services, including contraceptives.

“This notion denies the idea of a national community,” Gordon said.

While Gordon emphasized the socioeconomic aspect of the reactions against contraceptives, Philip McCarty, a professor of global and international studies at University of California Santa Barbara, believes that the problem has multiple layers and motives.

Because of the complex nature of women’s reproductive rights, Gordon resonated the idea of the necessity of having methods of safe birth control accessible to everyone throughout her talk.

“It is a human right, and in some cases a duty of a responsible citizen,” Gordon said.

At Home Movie Screening: The Death of Theater and the Birth of Digital Spectacle

The Dark Side of Stardom in The Weeknd’s “After Hours”