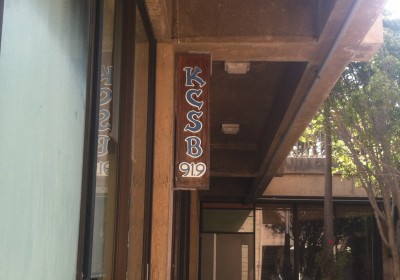 Early risers or night owls can tune in to the named KCSB show “Eternal Sunshine of the Melodic Mind,” hosted by Merry Inman every Friday from 6 to 8 a.m. The program features music that is upbeat, sunny and relaxed, providing an excellent example of one type of the non-mainstream, alternative type of music that KCSB constantly strives to promote.

“Eternal Sunshine of the Melodic Mind” is described as “eclectic” on KCSB’s program listings, which means that it isn’t limited to just one genre in particular.

Although many of the songs that air on the show are what you would call “indie,” the far-reaching label of eclectic still loosely fits- some songs lean towards pop, while others have a definite rock or folk influence.

“It’s very kind of underground, but in a way that it’s still accessible,” said Inman, when describing her show’s musical content. “I try and get things that are very catchy and upbeat. It’s a lot of rock and pop, but in a way that isn’t really that mainstream.”

It’s safe to say that Inman is fulfilling her goal of introducing listeners to artists that they have not necessarily heard of before. Many of the bands that she played tracks from on her show this past Friday are truly talented and could gain huge followings, yet have had little to no mainstream exposure thus far. Inman made sure to promote international music as well, featuring one singer from France and another from Israel.

“I have very random tastes just in general,” said Inman, elaborating. “I like all sorts of music, and just kind of pick and choose.”

One of the songs played in the show’s first hour was St. Vincent’s “Champagne Year.” This track, while on the slow side, features smooth vocals that give it a relaxing and catchy feel.

Another one of her selections, “When the Sun Don’t Shine” by Best Coast, was a bit more well-known. This track will easily get stuck in your head despite its short length of only two minutes. The band’s music in general is a perfectly cheery and upbeat embodiment of California surf-pop.

Inman seems very natural on-air, encouraging listeners to send in requests and providing background information about artists in a laid-back and entertaining demeanor.

Inman, a second-year history major, has been involved with the radio station since winter quarter of her first year. She discovered KCSB through a friend who worked as a KCSB programmer.

“He and I were trading music and talking about it, and he suggested that I join,” said Inman. “After that I signed up and went through orientation, and I’ve been doing it ever since.”

Many of the songs Inman played are fascinating rhythmically, which she says has become a recent development for her show.

“I’m really into [complex] rhythms, especially recently. I like the kind of layering of voices and drums and stuff like that,” said Inman.

The recently played track “Far, Far” by Israeli singer Yoel Naim provides one example of Inman’s musical leanings. It has a catchy, intriguing drumbeat that balances well with the vocals to produce an overall great sound.

Another highlight of the program was “Danse Carribe”, a song by Andrew Bird. Its combination of folk and rock genres and incorporation of a wide variety of instruments adds complexity, making the track even more remarkable.

“Eternal Sunshine of the Melodic Mind” proves to be an excellent program as a whole. The show features a nice variety of genres, the chosen artists are accomplished and worth listening to and Inman has a great on-air personality. However, the show’s aims go even farther than this; Inman makes sure that the music she plays on her show adheres to KCSB’s mission of broadcasting underrepresented artists. By airing these types of bands, Inman is able to educate listeners while exposing them to great music that they might not get a chance to hear otherwise.