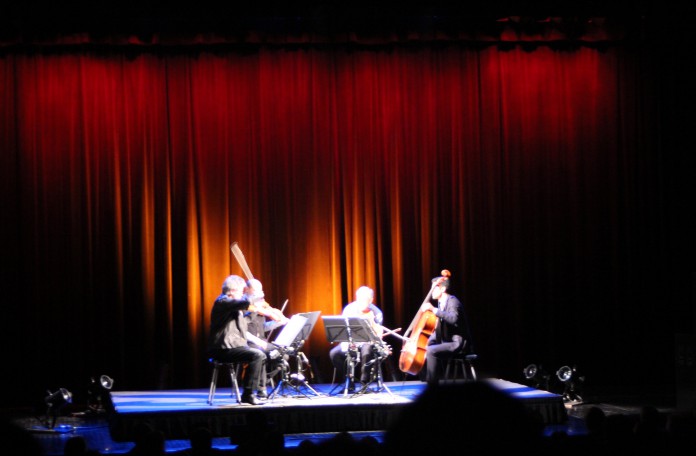 Every so often an artist or group comes along and reinvents a genre, subverting the norms, operating beyond its threshold and ultimately redefining its parameters. Historians normally call them revolutionaries and write them endless accolades in the annals of history. Last Thursday, University of California Santa Barbara was fortunate enough to host such a groundbreaking group, the Kronos Quartet, who performed the music of classical composer Steve Reich in Campbell Hall.

The Kronos Quartet is an avant-garde classical arrangement that formed in 1973.

“[We sought to make] the string quartet vital, and energetic, and alive, and cool, and not afraid to kick ass and be absolutely beautiful and ugly if it has to be,” said David Harrington, the band’s violinist and founding member.

The Kronos Quartet has been doing just that ever since, incorporating many experimental elements into their performances, such as tape loops, electronic drums and a long list of collaborators ranging from Tom Waits to Allen Ginsberg. Even more intriguing is that the Kronos Quartet has diverse influences outside of classical music. They have also performed classical arrangements of Jimi Hendrix songs and the indie favorite “Marque Moon” by Television. On Thursday, the Quartet decidedly stuck to the realm of classical music, but this did not make it any less experimental.

During their performance at Campbell Hall, the Quartet performed a variety of different pieces that were written by the equally experimental composer Steve Reich, who is well known for his use of minimalism and phasing patterns. The pieces performed included the “Triple Quartet” (composed in 1990), “Different Trains” (1988), selections from “The Cave” (1993) and the newly released “WTC 9/11” (2011), all of which fit under an umbrella of minimalism.

However, minimalism can often be a misnomer. On the surface, it may seem simple, but underneath it is far more complex. In minimalism, each instrument repeats its own simple riff or motif. Though none of these parts can individually stand alone as a viable piece of music, the combined sound of the entire ensemble creates a complex canvas with many different layers and textures of music.

The sounds created by the Kronos Quartet were hypnotic in their monotony, yet rich, with an endless variety of trills and drones that bobbed and weaved to intertwine into something incredible. Though the idea was simple, nothing was left to be desired.

The four members of the band were accompanied by something that is not typical of quartets, taped loops and prerecorded voices. These were used extensively to great effect in “Different Trains” and “WTC 9/11.”. In “WTC 9/11,” the prerecorded voices of numerous eyewitness accounts and NORAD air traffic controller audio were played in unison with the instruments, but with a slight phased echo. The effects of this technique was haunting, shattering the emotional distance that time has created between the audience and the events of 9/11. In addition, the motifs that were played in conjunction with the prerecorded voices were frantic and discombobulated, which further created a sense of chaos and panic.

Despite the incorporation of the modern styles of minimalism and phase patterning, the pieces also included more traditional elements of classical music, especially the imitation and interpretation of natural sound. The beginning of “WTC 9/11” used the staccato notes played in F major to recreate the same sound a phone makes when it is left off the hook. Similarly, in “Different Trains” the cello uses drones to mimic the sounds of breaking trains, sonically transporting the listener to Union Station.

It feels almost impossible to fully encapsulate the music or the ethos that the Kronos Quartet creates, due to its impressive, emotional and varied nature. But rest assured, the collaboration between Kronos Quartet and Steve Reich lives up to all of its critical acclaim, and more.