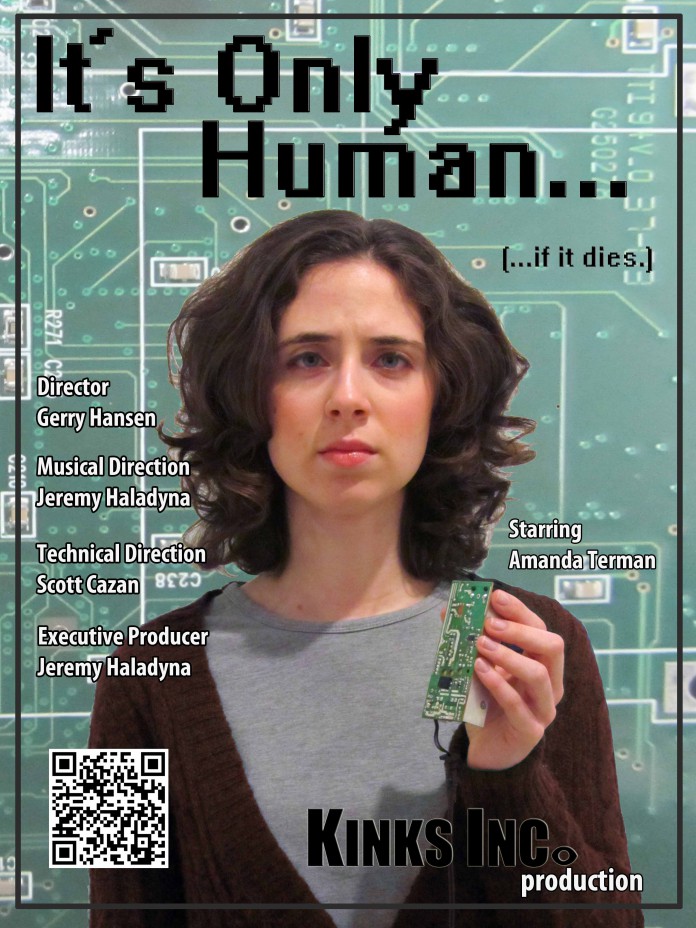 At the culmination of 20 weeks worth of work under the direction of Gerry Hansen, University of California Santa Barbara’s College of Creative Studies gave three live performances of their original, full length musical, “It’s Only Human… (if it dies),” as a part of the Primavera Spring Arts Festival.

It’s hard to know what to expect when the College of Creative Studies is involved in a production, and this musical is certainly no different. Based on the description I read before the show, I expected a serious and suspenseful play, but what I actually saw was so much more. Every scene had the audience laughing and crying as they contemplated what it means to be human in this technologically advanced age.

The musical takes place in the future, where robots are fully integrated into human society. It follows Sam (played by Amanda Terman), the only human cigarette girl at a nightclub, as she tries to discover who murdered her idol, singer Désirée (Patricia Reyes). The airhead April December (Grace Burdick), womanizing Monroe Childs (Mathieu Forget), sleazy club owner Leo (Jason Bornstein) and Ray the robot repair man (Matt Javidi), are just a few of the memorable characters that make up the colorful cast in Sam’s search for justice.

The acting in “It’s Only Human…” is notably impressive. Star Amanda Terman embodied the emotions of her character thoroughly. The final duet between her and Reyes was breathtaking. Burdick lit up the stage every time she stepped on as the bubbly April December. Javidi showed his amazing versatility by taking on two roles and enchanted audiences in both.

On the surface, the musical is a detective story, but not in the traditional sense. There is a serious undertone to the whole show, but comedy is a refreshing layer above the gravity. Comic relief is used frequently in this musical to change the mood so fast that sometimes it feels like it could give you whiplash, if whiplash was actually entertaining.

A lot of the entertainment factor of the play has to do with the music. Because there were so many student contributors to the production from the music department, the soundtrack to “It’s Only Human…” is incredibly diverse. There are soulful ballads, Broadway-esque dance numbers, catchy electronic songs and much more; many different styles to accommodate all different tastes.

Beyond the funny jokes and the catchy tunes, the musical is quite thought provoking. We are living in a time where technology is advancing at an astonishing rate, so it’s no longer crazy to imagine that we will have robots deeply involved in our lives in the near future. “It’s Only Human…” touches on the moral dilemmas that come with a robotic future. It asks questions such as “Do robots have a place in society? What tasks are appropriate for robots, and which are appropriate for humans?” and most importantly, “Are robots just human pawns, or are they superior to humans with the ability to take our place in the world?”

It’s hard to believe that this musical was written and performed by students. Though the musical is a massive compilation of many people’s talents, it is cohesive, and tells a great story.
There’s no denying the sheer talent of the actors, musicians, and crew members of this play, but the icing on the cake was definitely the extra little things that happened outside the main action of the play. If you had a smartphone you could get tweets during the show from the mysterious villain that doesn’t appear until the second act. And scene changes, which are normally awkward moments where the audience just sits in the dark, became part of the entertainment, as the actors stayed in character, and audiences got a chance to watch “robots” move the set around. These little additions, though not necessary, showed an awareness and knowledge of the audience that was highly commendable.

There were only three live performances of the musical, but if you missed it, don’t despair. The musical is intended for television, and is scheduled to air locally on channel 21 this summer. Also, the Primavera Spring Arts Festival goes on until April 14, so if this musical is a good indication of what the rest of the festival has in store, it seems like something you definitely shouldn’t miss.