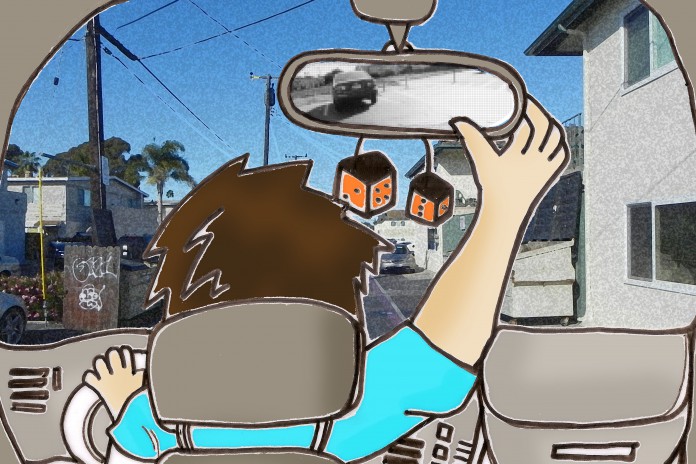 Imagine cruising around Isla Vista in a car packed to maximum capacity with feel-good music blaring out rolled down windows. Ocean breeze, sunny skies and by far the most attractive student body population can make driving in IV quite distracting. With students riding bikes and skateboards (even the occasional rollerblades or scooter) stopping for no one, accidents are inevitable. Now rewind 60 years, and imagine doing it without any seat belts, airbags or side mirrors. All of those now considered mandatory amenities featured in cars were once thought of as unnecessary hassles.

According to the proposition of the National Highway Traffic Safety Administration, all new cars sold in the United States will have rear-view cameras by the year 2014.

When seat belts and airbags were first proposed and then mandated by state law, people were not overly excited to abide. For some time, the U.S. auto industry was skeptical that such appliances can even be of any enhancement to passenger safety. Rejecting the new technologies that today we no longer take for granted, the general consensus of the late 1950s was that seat belts and airbags were dispensable. Do we see the pattern here?

Sure, we could just crane our necks around with one arm extended behind the passenger seat and look behind us like we were taught in drivers ed. We could simply take a glance at our rear-view mirrors and peer around for children or often even raccoons (who tend to think that the street is a good place to hangout). Even so, to gage the full extent of everything behind a car, and seeing as cars possess so many blind spots, one would have to turn their head so many times and in so many directions it could become somewhat of a morning exercise in and of itself.

Now, let’s be honest. In the short time that I’ve had my license, and in the even shorter time that I’ve been living in IV, anyone who knows me can attest to the fact that I’ve backed up into a good amount of poles, trashcans and, yes, a tree (that I swear did not exist when I got into my car).

While some of you may be thinking that I’m just a substandard driver (admittedly so, but not the point), according to the New York Times, 228 people die annually while another 17,000 people are injured from being hit by an automobile driving in reverse. This death toll also includes approximately two children per week being run over by cars backing up.

Besides, it would only cost about $160 to $200 per car to install a rear-view camera, which is relatively low considering the cost of a car itself (not to mention, a human life). Currently a function in less than half of the cars sold in 2012, the cost of rear-view cameras are neither exorbitant nor should they be a restrictive factor.

So I ask you, why not jump on the camera bandwagon? I mean, instagram and hipstamatic have already been embraced with open arms (and quite frankly with outrageous obsession), another function of camera technology logically follows suit. Better yet, it comes with a bonus- it could save lives (and trees!).

In our new technologically driven society with avant-garde gadgets and contraptions invented faster then we can keep up with, why fight it? Why not welcome the newest of technological advancements that can potentially better our lives in the way that both the seat belt and airbag have done.

The United States of Beyoncé & Co.