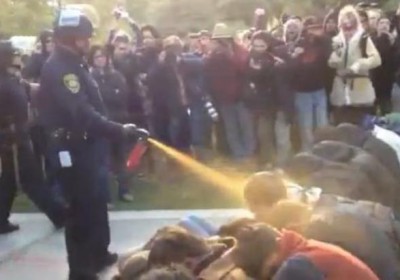 Alameda County Superior Court Judge Evelio Grillo ruled Wednesday, March 28 to block an injunction by a campus police union to prevent a report of the November pepper spraying of students at University of California Davis from becoming public. The police union and the UC Regents presented arguments for the judge Wednesday morning who may alter or reverse his ruling.

Grillo maintained that the names of the officers involved in the incident could be redacted from the report. Lt. John Pike, who pepper-sprayed otherwise non-threatening Davis students during a November 2011 protest, was exempted from the decision.

“We are pleased that Judge Grillo agrees, in almost every respect, with our arguments for full public disclosure of reports from the task force chaired by former California Supreme Court Associate Justice Cruz Reynoso,” said University of California General Counsel Charles Robinson. “While he also ordered names of some police officers in the reports to be redacted, we would like that information ultimately to be made public.”

During the hearing, lawyers representing the Federated University Police Officers argued that if made public, a negative evaluation of UCD police officers’ conduct would “embolden the harassers” of UC police officers. Grillo supported his ruling by saying that the union’s argument was speculative. Robinson agreed with the judge, saying that it was a transparency issue “to provide answers to the people.”

“Some of these made me sit up in my seat,” Grillo said. “Some people called up every fast food joint in Davis and made orders in Pike’s name.”

A lawyer representing the American Civil Liberties Union agreed with UC lawyers, saying that information goes stale if left undisclosed, and that the people affected deserve to see conclusions made by the independent investigation.

A union lawyer disagreed saying he was “not criticizing the public,” but that he believed Davis locals were likely to retaliate against UCD police upon the release of the report.

The University of California launched two separate investigations in reaction to the November confrontation between police and protesters to look into whether UCD police had committed any wrongdoing, and to determine what policies the department should change in the future.

Former California Supreme Court Justice Cruz Reynoso, who has previously advocated the release of the full report, led the latter investigation. Another investigation headed by Kroll Associates, a security firm based in San Francisco, is looking into whether actions taken by UCD police during the protest breached department procedure. The University of California commissioned both investigations.

“All of us- including Justice Reynoso and UC President Mark G. Yudof- remain committed to full public disclosure of the findings and recommendations of the task force,” said Robinson.

“Sharing and discussing the task force report with the UC Davis community- students, faculty and staff- is a vitally important step toward healing and understanding.”