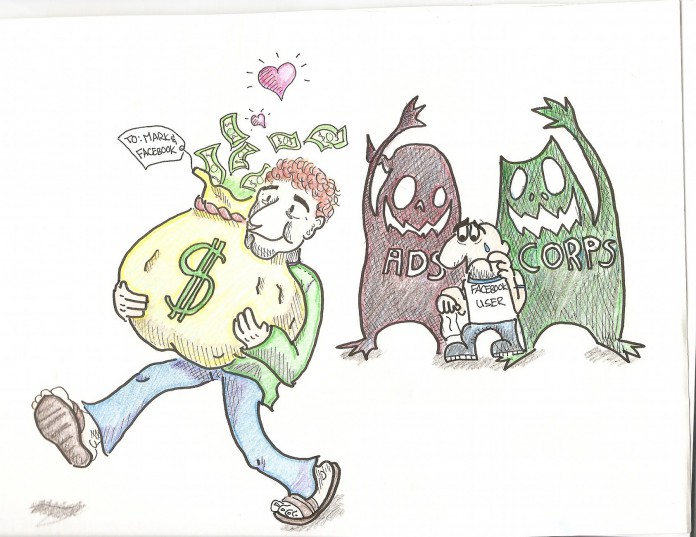 When it comes to maintaining their privacy, Facebook users now may have one more thing to worry about. The social networking site has made new developments for advertising, which include using members to promote products they have “liked” or posted about. This new advertising method, which was enacted a few months ago, has stirred some controversy.

For instance, Nick Bergus jokingly posted a status with a link to a 55-gallon of lubricant from Amazon.com saying “…For Valentine’s Day. And every day. For the rest of your life.” Following this post, Facebook began using Bergus as a sort of pitchman for the product. The sponsored story started showing up on various users’ newsfeeds, including friends of Bergus, who were amused with the advertisement.

However, although the ad was humorous for many, there are other underlying issues regarding this new measure. Of course, Facebook is a muti-million dollar company, and has every right to “exploit” their member’s online activity to endorse products. The fact of the matter is that this new method of advertising is arguably an invasion of privacy.

]In the case of Bergus and the lubricant ad, he saw the humor in the website’s maneuver, but commented on his blog, “…In the context of a sponsored story, some of the context in which it was a joke is lost, and I’ve started to wonder how many people now see me as the pitchman for 55-gallon drum of lube.” After all, who wants their personal status displayed for many to see all over the World Wide Web?

“Bergus’ case is a little unfortunate. I definitely would not want the entire social network seeing me as a spokesperson for lubricant,” she said.

Not many would. The site’s recent advancements have been what some may call ruthless, or a little extreme, to say the least. The monetary incentive behind this strategy has been blatantly obvious, leaving many disappointed with the site. Some are growing tired with the site, and others are moving on to simpler networks, such as Twitter and Google +.

Others argue that Facebook has every right to exploit its users. That is what we agree to when we sign up for an account. We agree to make a profile, and in doing so, we understand that despite customizing our privacy settings, nothing is ever really private when it is present online. So when Facebook decides to promote the products of websites, such as Amazon.com, we have no choice but to sit and let it do so.

According to fourth-year sociology major Aleks Markelov, this is the logic users should maintain when logging in to their accounts.

“Facebook’s ability to do this is perfectly legal, and no one should be complaining, especially if they feel comfortable putting just about everything else online for everyone to see,” he said.

As the company grows richer and richer and our privacy becomes more and more limited, many can’t help but wonder: What lengths will the company go to in order to continue advertising, and at what cost for its members?