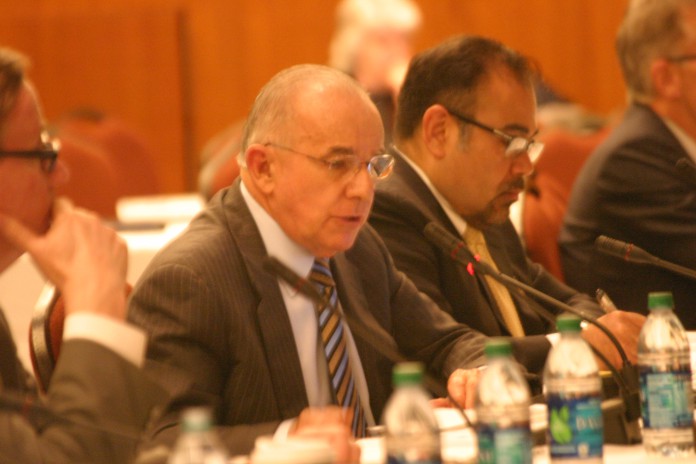 Regents of the University of California kicked-off their three-day meeting at UC San Francisco Mission Bay on Tuesday with a discussion item centered on UC health care reform, a new student health center management structure and the possibility of increasing student representation on various advisory committees.

The Committee on Health Services, chaired by Regent William De La Peña, analyzed and discussed numerous presentations given by UC vice chancellors of health, as well as deans and chief executive officers of the five UC schools of medicine, regarding the structure, cost and effectiveness of services offered through their research medical centers and the ten student health care centers.

Building upon points raised during their previous UC Regents meeting this year on January 18 at UC Riverside, the committee reviewed possible threats against the financial success and ability of the medical centers to support the academic mission of UC healthcare. Namely, the University of California Retirement Plan, which may consume the aggregate medical centers’ positive financial margins by 2015, cuts in federal and state spending for health insurance plans such as Medicare and healthcare reform.

“This is a perfect storm because all three of these things are coming together,” explained John Stobo, senior vice president of UC Health Sciences and Services. “In 1997 when this happened before there was plenty of room to run and hide but that doesn’t exist any more, there isn’t any money outside the system.”

While Stobo acknowledged during his presentation to the Regents that UC Health, which is a partnership of the UC medical centers and the 10 hospitals between the UC Davis, Irvine, Los Angeles, San Diego and San Francisco campuses, may cost over 50 percent of the UC’s $20 billion budget, it also generates over $6.5 billion in revenue for it, while training nearly 50 percent of medical students and residents in California. Therefore, any new financial models or management structure which would help maintain the quality of health care offered, while decreasing costs, is vital to implement across all UC campuses.

However, Michelle Greenwood, Chair of the Student Fee Advisory Committee and graduate student studying cognitive and information science at UC Merced, stated during public comment that she was afraid a new financial model for UC student health care centers could come at a higher cost for the UC system, which would then be borne by the shoulders of students in the form of higher premiums for the UC Student Health Insurance Program.

“It is concerning to me as a student, and I think this may also go against the mission of mandating things with student fees,” Greenwood added.

Bahar Navab, UC Berkley Graduate Assembly president and graduate co-chair of the Council of Presidents, also expressed concern during public comment about whether student fees are currently being used appropriately by UC student health centers, and whether the Committee on Health Services has received all the necessary input from health center directors and staff members prior to implementation of a new financial or administrative models set for the future.

“Please engage students as much as possible, putting in some guarantee to students that it won’t come out of SHIP or require an increase in service,” said Navab. “Lay out for students what are the assumptions or changes put on students as a result of them.”