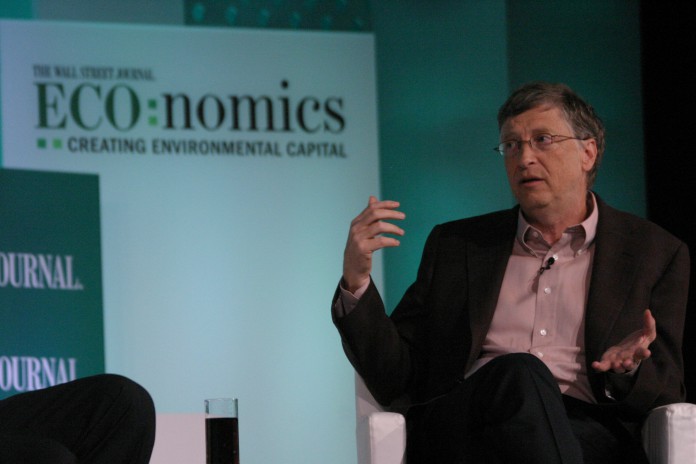 During the Chairman of Microsoft and Co-Chairman of the Bill and Melinda Gates Foundation’s discussion with the Wall Street Journal’s Online Deputy Managing Editor and Executive Editor Alan Murray, the two discussed carbon capture, future nuclear power plants, the importance of innovation and the effect the lack of energy has on the poorest people around the world.

“I spend a fair bit of my time on energy, for a couple reasons,” said Gates. “One is that, if you want to improve the situation of the poorest 2 billion on the planet, having the price of energy go down substantially would be about the best thing you could do for them.”

“Energy is the thing that allowed civilization over the last 200 years to dramatically change everything,” said Gates.

The dramatic way energy can have an effect on our future, and the need to reduce energy costs, was the center of conversation for the remaining discussion.

“You’ve said we have to, not just slow the growth, not shrink carbon emissions, but get to zero,” said Murray, who facilitated the discussion and asked most of the questions. “The goal has to be zero. Why?”

“Well it doesn’t have to be absolutely zero, but if you want there not to be increased warming every year, you have to get to extremely low numbers,” responded Gates. “What we’re asking civilization to do here is very, very dramatic.”

In order to effectively reduce the amount of carbon in the atmosphere, Gates states that the world needs to have a year in which there is less, or even a lot less, carbon production than the year before. Consistently, however, the world has been producing more and more carbon each year.

“The likelihood of us reaching any of the goals we’ve set seems very daunting,” said Gates.

“When do you think we could get to global consumption [of] 50 percent or less?” asked Murray.

“People underestimate how hard it is to make these changes,” said Gates. “They look at things that are deeply subsidized and they forget that they are deeply subsidized, they look just at the rich world, and they don’t look at where all the energy increase is taking place, which is in middle and low-income areas. So I think the problem is way harder than many observers think.”

“If we really fund basic research at a reasonable level, which the U.S. does not, other countries do not, if we have policies to encourage experimentation, which you know just take any one of the things nuclear, carbon capture, we’re not doing a good job on that, transmissions, storage, if you do the right things there is a chance to meet very aggressive goals in a 75 year time frame,” said Gates.

According to Gates, one of the most important factors, or miracles, as Murray called them, alluding to Gates’ 2010 TED Talk, to reducing carbon emissions in the future is carbon capture, a way of capturing and storing carbon dioxide in a way that does not allow CO2 to escape into the atmosphere. But you have to be willing to pay for it.

“That miracle alone would get you a long ways, because the planet has a lot of coal and a lot of natural gas,” said Gates.

Another “miracle” Gates discussed was nuclear energy, an idea he noted is not currently popular in places like Japan or Germany. While many Generation I and II plants, plants that are older with different ways of generating electricity, are efficient in producing energy, Gates focused on the Generation IV plants he has invested in which, according to him, are “way cheaper than today’s nuclear power plants.”

Generation IV plants would use a reactor, known as a fast reactor, that would burn plutonium, pull it out and then burn that product in a process known as breeding in a fast reactor, creating a very radioactive byproduct.

“In the same reactor, you both burn and breed and so instead of making plutonium and then trapping it, we take uranium and the 99.3 percent that you normally don’t do anything with, we convert that and we burn it,” said Gates. “So it’s like a candle… our flame is taking the normal, depleted uranium, the 99.3 percent that’s cheap as heck and there’s a pile of it sitting in Paducha, Kentucky that’s enough to power the United States for hundreds and hundreds of years, you’re taking that and you’re converting it to plutonium, and then you’re burning that.”

“Gen IV… will be a no human required, no zirconium turning into hydrogen to explode type design,” said Gates.

The timetable for this type of plant? Gates gives it to 2022, granted everything goes perfectly, for the demo reactor to be in place.

“By 2028, again assuming everything continues to go perfectly, it will be a design that could be replicated and built in many, many, many, many places. At that point, because you have no fuel constraint, and according to me you have extremely good economics, good safety, no proliferation no waste, then you could go nuts.”