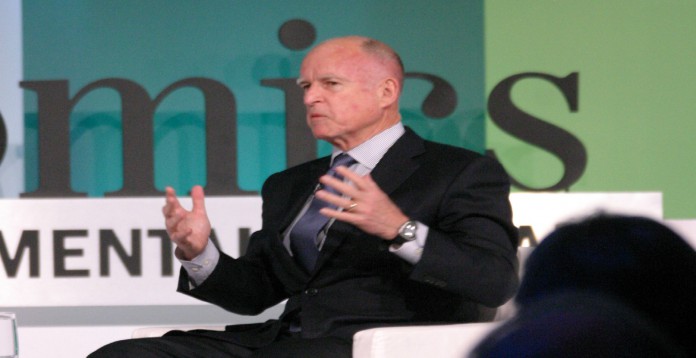 Kicking off the third and final day of The Wall Street Journal’s ECO:nomics conference, Governor Jerry Brown discussed the future of renewable energy in California and even cracked the occasional joke.

“Every Governor usually inherits a mess,” said Brown. “I’m open, I’m curious, I like to try new things. So if we didn’t try something before [in terms of renewable energy], maybe we can try it now. And stuff we haven’t done, that’s what we gotta do.”

In terms of innovation, Brown made it clear that California has always been a leader. The divide between Hollywood and Silicon Valley, and Brown’s deeming of Silicon Valley as the winner in that competition, is an example of that.

“You have to think big, thing long, but you don’t get there overnight,” said Brown, referring to the amount of work and effort that it will take to get California to use a larger percentage of renewable energy.

On the issue of nuclear power, a renewable form of energy that has drawn supporters like Bill Gates but has dangers exampled by the recent Fukishima meltdown and others that have occurred in California in the past, Brown agreed that he’s tolerant of nuclear energy, but that he’s “more skeptical of everything” these days.

“Just looking at stuff, shit happens,” said Brown. “Nuclear’s got issues, but it’s good for greenhouse gases, it’s pretty reliable. Our plant at Diablo Canyon is going at 98 percent reliability, which is a lot higher than it was 30 years ago.”

An increase in the reliance on natural gas for vehicles and other electrical needs was an option for alternative energy addressed by many panelists, including BP executive T. Boone Pickens. Governor Brown admitted that when he had started hearing about fracking, the process of mining natural gas from deep underground, he “called up one of our leading oil companies and said ‘what’s the story on fracking?’”

“Well,” the nameless executive reportedly told Brown, “it’s not as bad as the environmentalists say, and it’s not as safe as the oil companies say.”

Brown admitted he wasn’t sure about where he stood on fracking at this time, but that within the next two or three weeks, he should be able to provide more information.

Brown and facilitator Robert Thomsen, editor-in-chief of Dow Jones & Company and managing editor of The Wall Street Journal, also discussed the ‘sticker shock’ that comes with photovoltaic fuel sources as well as California’s production of oil and tariffs on solar panels coming from China, before opening up time for questions.

Progress and future of the high-speed rail system, a system reportedly to cost much more money than previously anticipated, and how realistic it is that it’s really going to happen within a lifetime was brought to the Governor’s attention.

“Well, you have a lot of competing needs, and so it takes a while,” said Brown, noting the first phase of the money from work Schwarzenegger had done, and from the federal government, is already in place.

“What really makes it daunting is that, where do we get the next phase of the money?” he added.

The high speed rail, voted on in December of 2010 by the California High Speed Rail Authority to begin construction would reportedly make a loop between San Francisco San Jose, Merced, Bakersfield, Palmdale and then would build up the metro line of Los Angeles to meet at Palmdale.

“So, it’s a big deal, there’s money…There’s the political interests. I think if you look out over the next 50 years, and you say we’re going to get 20 million more people and we’re going to need to build more airports we need more runways, we need more freeways, we’ve tried building a freeway in Orange County… They stopped it,” said Brown.

“As I look at it, the high speed rail is good and our analysis tells us it’s cheaper to build a high speed rail. It uses greenhouse gases more efficiently, certainly a higher quality that’s sitting in a car,” said Brown. “And with so many millions of people going to the Central Valley, that, if we design it right and build the kind of cities, build out the cities of the future at these various stops, I think it will be a fantastic thing.”
“So we’re on track we’re having our business plan put out to let people evaluate and give us their best ideas,” said Brown.

There will be a lot of “heavy lifting” according to Brown, and there is a need to be able to marshal the money that already exists for the rail as well as attain new money.

“I think when you look at it economically, and environmentally, the quality of life, it makes a lot of sense,” said Brown. “And we’re on track, we’re moving forward, we’re putting out a business plan we’d like critique, and analysis, but we’re headed to start some building toward the end of this year.”

“I think we can learn a hell of a lot more from our mistakes, than from our successes,” said Brown.