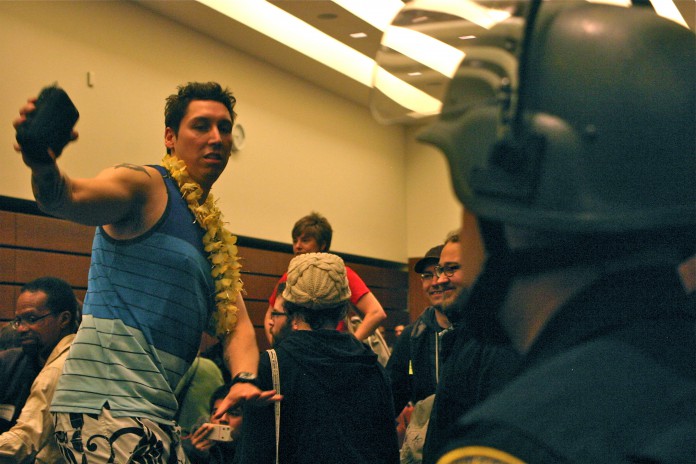 As the University of California Board of Regents concluded their public comment period in order to begin their formal agenda, confusion arose about which speakers list was being used by the Regents.

As Regents, chancellors and staff members exited the room, UC students began to dance on top of chairs in bathing suits while playing music, stating they were on spring break and should act accordingly. The “‘Rogue Element’ Spring Break Party @ UC Regents Meeting” was planned by Take Back UCLA on Facebook. Other audience members continued to shout complaints, demands and public comments to a room absent of the Board of Regents.

UCPD officers in full riot gear filed into the room, and Assistant Chief of Police Paul Berlin began to announce directions for discontinuing and dispersing the public assembly taking place. UC Police declared it an unlawful assembly and gave the protestors three warnings to leave the room. Though some audience members proceeded to defy directions and continue to remain in the room, others began to leave. After 20 minutes, police removed all audience members, a crowd of approximately 40 to 50 people, at the end of the last five-minute warning without incident, and began to lead them downstairs to exit the building.

However, right outside the doors of the UC Regents meeting three protestors, identified as UCLA individuals Andrew Harkness-Newton, 26, Cheryl Deutsch, 27 and Matthew Sandoval, 32, were arrested pending charges around 9:40 a.m. during a scuffle in the hallway, which may have been due to refusal to leave the area and resisting arrest. Afterwards, UCPD officers continued to shepherd protestors downstairs until they exited the building peacefully.

Fly into the Fairy Village at the SB Museum of Natural...