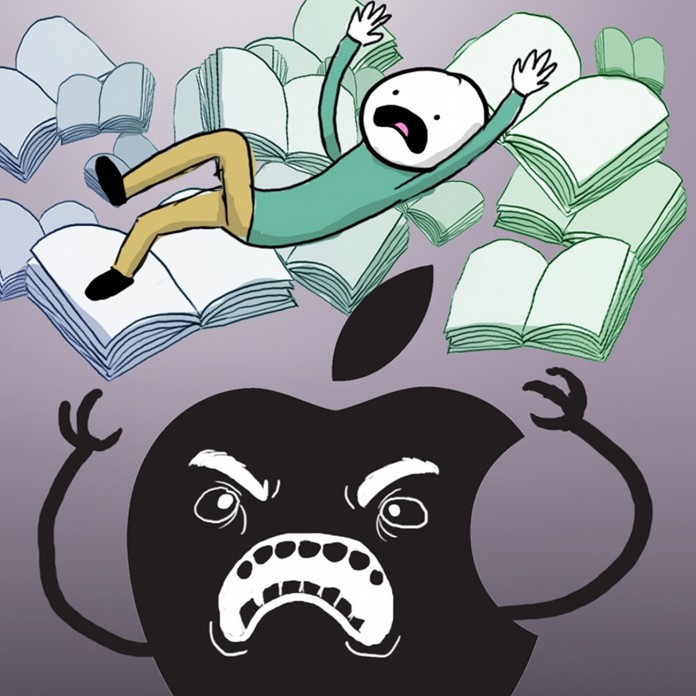 Released Jan. 20, Apple’s iBooks Author software is set to revolutionize the textbook publishing industry. Issues with their End User License Agreement, however, are causing a lot of controversy.

Apple’s website describes iBooks Author as “an amazing new app that allows anyone to create beautiful Multi-Touch textbooks” for iPad and normal e-books for other formats. iPad sales are covering three-fourths of the tablet market, with over 11 million iPads sold in just the last quarter of 2011, so Apple’s new publishing software is arriving at an exciting time for the brand.

While marketed as an instructional tool for educators, iBooks Author is a free application that allows anyone to create iPad-friendly e-books. This exciting opportunity allows for fast publishing of information by anybody, especially compared to the now-outdated paper publishing industry that required authors to jump through the multiple hoops of editors, publishers and retailers before their work could be available on shelves.

Despite the user-friendly approach, a hidden controversy was lying in the user’s legal rights.

The legal problem with this situation is that Apple assumes ownership of any work completed using iBooks Author that the user plans to sell for a fee. This is an unprecedented assumption of user output.

Think of it this way: How would you feel if Microsoft presumed to own every one of your homework assignments that you completed using Microsoft Word? With the accumulated academic credit from every user, Bill Gates would have millions of degrees. This is what Apple was attempting to do through its original EULA language, but rather than academic credit they wanted the profit margins from iBook sales.

“A corporate assumption of control over user output is not new, however usually these contracts are negotiated with the client and signed using pen and paper,” says iOS and Mac developer Dan Wineman. No company has ever tried to control user output just through the software.

On Feb. 3, Apple released the second version of the iBooks Author software with new EULA wording. This new version does not change Apple’s attempt to assume ownership of user work, but instead makes their control more blatant to users.

Furthermore, Apple once again attempts to lock its iBook format onto the market, making it legally and technically difficult to publish to multiple formats that could be read on, say, an Amazon Kindle.

While many users may not mind Apple’s control over their e-books, those who prefer to retain their rights over published work may want to look into other e-book publishing options.