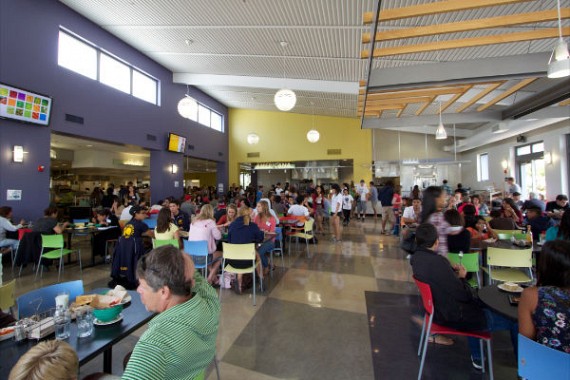 Just when I thought the University of California system couldn’t find any other way to better waste our parents’s hard-earned cash, they go and do something like this. It appears Housing and Residential Services is rolling in the dough this year. They have recently installed cameras outside of Carrillo, Ortega and De La Guerra Dining Commons as a way for students to see which lines for food are the shortest, all to help them avoid eating in overcrowded dining commons.

Now, let me be clear. I can be pretty lazy and pretty impatient when it comes to just about anything. I hate waiting in lines just as much as the next person. But is this really necessary? Since when does Housing and Residential Services support our desire to be sluggish and inactive college students? We could be putting this money toward something else–anything else. Perhaps improving the quality of food served at these establishments? Just a thought.

But ignore my rants for the time being and we shall get the facts straight. Richard Kelly, a business manager over at Housing, who spearheaded the project, explains how and why the cameras came about.

“We wanted to give students a tool to help them manage their time better because we know how busy they are. The implementation and function is relatively simple–the cams allow students to check the lines at the three Dining Commons before committing their time to travel to a particular one,” said Kelly.

Okay, so maybe the big wigs over at Dining Services think they are on to something. Maybe I’m the crazy one. But I did a little survey of my own, pulling aside a couple of students, explaining the situation and asking them what they thought.

“I guess I don’t really get it, to be honest,” said second-year psychology major Tanya Zadoorian. “Sure, there are lines at times, but they move pretty swiftly. And ultimately that’s not going to factor into my decision. I’m more concerned about where the tastiest meals are being served.”

Yet, Kelly concludes his interview under the mistaken impression that students are thankful for the new installments.

“My understanding is that we’ve been receiving positive feedback and that students appreciate a tool that helps them to make informed decisions that saves them time,” said Kelly.

What rock has he been living under for the past few weeks? Do us a favor and save our money instead.

So although it is nice on behalf of the Dining Services to give us the opportunity to base our lunch locations with the use of these cameras, the general consensus seems to be this: We don’t need them.

So, thanks, but no thanks. But the next time we want our money put toward something substantial, we will definitely be sure to contact you.