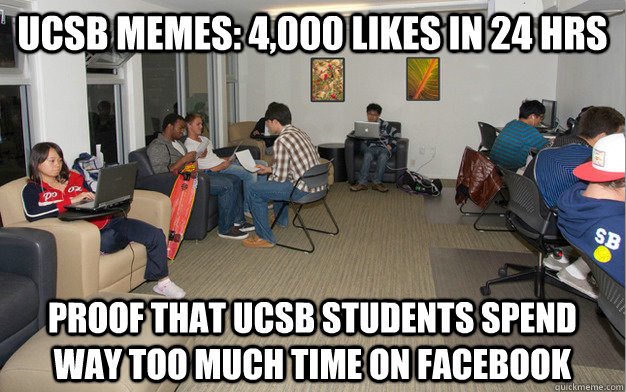 The UCSB Memes fan page arose on Facebook last night and was an instant hit across the campus and on the Internet with over 1,000 likes and over a hundred posts in less than 24 hours.
The fan page, found at http://www.facebook.com/UCSBMemes, uses traditional meme photos including First World Problems and Socially Awkward Penguin as the base to comment on experiences unique to UCSB and Isla Vista. The memes vary in content, wondering if Portola does actually serve awful food or if those living in FT decided to lie to the rest of campus, and getting upset at the slow bikers on the bike path, and they seem to have struck a nerve with the student body.

“Although I can tell it will become another distraction from studying, I think UCSB Memes is a great way to relax and unwind during midterms,” said Sarah McClanahan, third-year communications and psychology double major. “It’s hilarious to interact with my fellow Gauchos and reflect on common issues, problems or hilarious anecdotes we all encounter while attending school at UCSB. It’s refreshing to know everyone goes through the same rites of passage as a freshman. I believe this website will serve to unite us and create some necessary stress relief.”

The creator of the page, who prefers to keep himself anonymous, didn’t expect the memes to gain so much popularity so quickly. Mere hours after creating it late Tuesday night, the page was beginning to spread with unexpected speed across Facebook and he said he was surprised by the reaction.

“Last night I just wanted to see what some of my friends could think up after my first couple, so no I didn’t expect it to blow up like it did,” he wrote in a Facebook message. “A lot of the meme’s are so clever and funny and it’s kind of cool no one knows it’s me. In terms of moderating no one has posted anything extremely negative so it is really fun.”

The meme page is extremely UCSB particular and most of the jokes can’t be shared with other campuses, giving the page a unifying factor amongst the students who enjoy it.

UCLA and UCD won’t understand why a freshman asking when Floatopia is worthy of a laugh or the simple joy of the Ortega Waffle Bar, and this creates an exclusivity to the page. It’s specifically for the enjoyment and entertainment of UCSB students and graduates, not for the rest of the world.

“I think it’s awesome how the whole UCSB community is basically making inside jokes out of popular Internet icons,” said third-year electrical engineering major Geoffrey Josephson.
The page continues to grow and Facebook is littered with reposted pictures swiped from? the site. As of press time, over 5,100 people have liked the site and, considering its newness and the interconnectedness of a student body permanently plugged into Facebook, this number can only grow as the week goes on. The creator remains unsure of the page’s future.

“Yeah of course people will get tired of it but meme’s have been popular for a while so only time will tell,” he wrote. “I have some already implemented in a special album where meme’s with more than thirty likes were placed which just seemed to be futile when I got out of my history class and one of my roommates meme’s received 165 (and counting) so I am going to have to change so I don’t have to constantly update it. I have some ideas on how to keep people interested and am also willing to take suggestions. Just writing this I have received 50 more likes so at the moment I see no slowdown.”

Students are encouraged to create and post their own memes and laugh with the rest of campus at the special experiences privileged to UCSB students. Try to go easy on the freshmen.