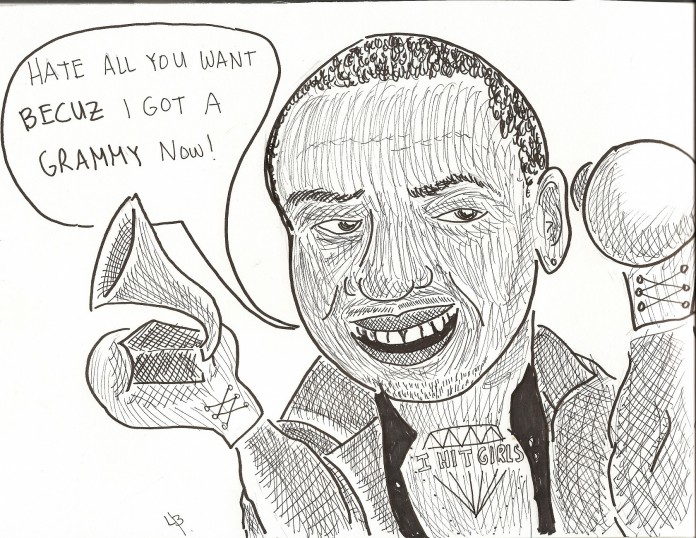 Chris Brown was given the honor of performing at the 2012 Grammy’s and won the award for “Best R&B Album.” Just three years before he was arrested for attacking his then girlfriend, Rihanna. Surely you haven’t forgotten?

Fans and critics alike have been tweeting furiously about the implications of his Grammy performances. While some praise him for his comeback, others criticize the messages allowing him on stage sends. Nothing, however, is more concerning than the tweets from young female fans that claim they would let him beat them.

One girl tweeted, “chris brown your sexy you can punch me in the face anyday #imkindanotkidding.”

I kinda wish she was kidding. Is physical attractiveness really all that is needed to make abuse excusable? I would hope not. Is it his fame that makes a punch in the face an acceptable price to be close to him? Again, I would hope not. What is wrong with our society that celebrities can commit acts of domestic violence and still be praised? Furthermore, how did fame become so valued that girls will accept being beaten if it’s by someone famous?

Perhaps Chris Brown’s musical achievements are enough to earn him a Grammy, but are they enough to risk desensitizing young women to domestic violence? Is his talent enough to excuse his past crimes? You may ask, “What does a guy have to do to move past his mistakes?” That’s a fair question, but shouldn’t we be asking what a celebrity has to do to lose the loyalty and affection of his fans? Are young girls so obsessed with fame that even the prospect of being beaten isn’t enough to turn them off it? Apparently so.

One fan tweeted, “I know Rihanna didn’t like it much, but Chris brown you can punch me in the face all you want. #sorrynotsorry #sexy.”

To say Rihanna “didn’t like it much” is a gross understatement. She was hospitalized after what he did to her. Politely allowing Chris Brown back on stage without a clear sign of remorse or repentance is allowing others to forget just how serious his crime was. He beat his girlfriend and three years later is honored on stage at the Grammy’s? Perpetrators of domestic violence simply should not be honored. I’m not opposed to second chances, but has Chris Brown really earned his? I don’t think so.

After his win at the Grammy’s he tweeted, “HATE ALL U WANT BECUZ I GOT A GRAMMY Now! That’s the ultimate F— OFF!”

Questionable spelling aside, this statement demonstrates how unwilling he is to take responsibility for his actions. I think it’s perfectly reasonable to hate a guy who abuses women, but maybe I’d be a little more forgiving if he seemed even remotely reformed. He has a Grammy and suddenly we’re supposed to forget what horrible things he does? I don’t think so. It’s not up to us to stop being critical of his behavior; it’s up to him to start behaving like a decent human being.