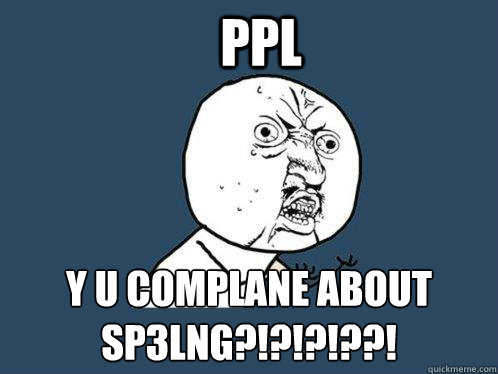 I know there’s a lot of people who complain about how nowadays people constantly misspell things, sometimes on purpose, on their phones and online. They complain about how memes are ruining everyone’s grammar and interfering with their ability to write properly. According to them, things like chatspeak (e.g. purposely shortening and/or misspelling words in typing) and knowingly using poor grammar will negatively impact how English is used and the quality of writing on the Internet.

However, I do not believe that chatspeak or memes are, in and of themselves, necessarily a big problem.

Obviously, if you want to seem professional to your professors or your (potential) boss, you should not speak or write like this. Asking how someone liked a game on a casual forum by typing, “HOW DO U LIEK THES GM3??!!???! OMG,” may be acceptable, but you’d obviously avoid writing this in a business letter. But among friends at least, chatspeak isn’t a bad thing. The key is that you must treat the misspellings and acronyms as a fairly casual way of speaking and writing.

I don’t use chatspeak, but I do tend to use lots of slang and acronyms when I talk to my friends in real life and online. Sure, I will respond to something overly strange with an “OMG” or reference some meme on a regular basis. But I can and do avoid writing like this when I work on my class assignments or for this very publication (or else my superiors have made a grave error in letting me write this). I might have to watch myself a bit when I’m trying to be professional, but it’s more of an annoyance than an actual problem.

One needs to remember why chatspeak came about in the first place. While sometimes teenagers (or maybe their parents) will use it to look cool, other times it is used because of space constraints on sites like Twitter and in text messaging. Since Twitter only allows people to use 140 characters (letters, numbers or symbols), longer messages either flow into another Tweet or get shortened with chatspeak.

There’s also the possibility that using bad grammar and spelling purposefully will go out of style. I know a lot of people do not appreciate having to decipher chatspeak both from the Internet and in my day-to-day life. So chatspeak may not be quite as ubiquitous in writing that is supposed to be “good” or otherwise. The slang and idioms may eventually go out of style and get phased out. Not a whole lot of people use “groovy” or “radical” anymore in place of “cool,” so it’s extremely likely people will eventually stop referencing “It’s over 9000!” on Internet forums and excessively using the word “epic” for things they find cool.

Even if these changes do eventually stick in some way or another, languages are dynamic, and are constantly changing. What is considered poor grammar and spelling now might eventually become “proper” grammar and spelling. After all, English doesn’t use “thou” or “thee” anymore, and they were the standard a few centuries ago. English, and other modern languages for that matter, are built on many changes in pronunciation, grammar, meanings of words, and many other aspects of languages. Who knows? Maybe “lol” will become an accepted word some day.

Sure, you would not want to use bad grammar or misspellings in your more serious writing. But around friends or on casual forums, I’d say, “Reference all the memes (that you care to)!”