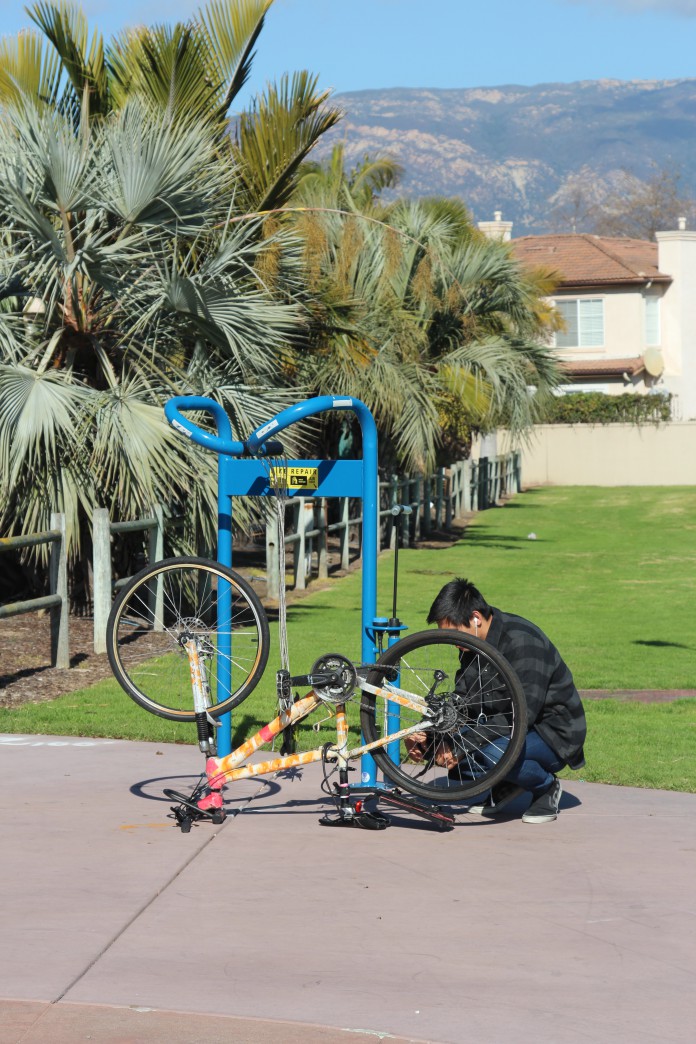 Rather than drag their bikes in need of some TLC all the way to the AS Bike Shop, students now have some more ‘wheel’-istic and conveniently located bike repair options on campus. Thanks to Housing and Residential Services and Associated Students, as of this quarter there are now new, bike-friendly additions around University of California Santa Barbara called Fixit Bike Repair Stands.

Fixit Stands are blue stations with tools available for free, available 24/7 to the biking community of UCSB who need quick fixes for their bikes. The contraptions feature 10 tools that are suitable for any type of bike including wrenches, screwdrivers and a bike pump. The design of the unit also serves as a structure to hold the bike up at arm-level. Although the Fixit Stands aren’t total replacements for the AS Bike Shop, they’re suitable for small problems like tightening something, filling a flat tire or putting a chain back on.

There are four stands so far, located at the De La Guerra Dining Commons, Santa Catalina and San Rafael Residence Halls and San Clemente Villages. Due to the positive responses they’ve received so far, two more will soon be added to the Family Student Housing complexes.

Jonathan Abboud, the AS on-campus representative, helped Housing pick the locations for the Fixit Stands.

“There has been one concern with them so far, and that has been not everyone knows how to use the tools to fix their bike,” Abboud said, further stating that there will be workshops held by AS in the future that will be free for students on how to use the stands.

“I love that it has a bike pump because trying to ride home with a flat tire is the worst,” Alexis Satterthwaite, a second-year student said. “The only thing is, I don’t live on campus and so the residence halls are a bit out of the way. At that point, I’d probably just go to the AS Bike Shop. It would be nice to see one in a more central location, maybe along a bike path.”

For students who have the same concern, Abboud said AS is working to implement more Fixit Stands near Storke Tower, Campbell Hall and in Isla Vista to serve more of UCSB’s bicyclists. This is possible due to the success of the current stands and the notable lack of theft around those areas, which was a preliminary concern for those involved in the project.

Stephen Stann, a fourth-year student who lives in Goleta, has been driving his car for the last few years instead of biking.

“During my freshman year, my chain came off while riding my bike to class and deterred me from using my bike for two years,” Stann said. “The fear of my bike breaking down and stopping me from getting home or to class makes driving my car to school an obvious choice. Knowing these stations exist encourages me to want to start riding my bike again because I’m less afraid of a breakdown.”

At a university where hundreds of students utilize the various bike paths every day, the Fixit Bike Repair Stands are helpful resources for the UCSB community. Their accessibility and user-friendliness make them practical and well-received additions to the campus, ensuring bike safety and further promoting the bike-friendly nature of UCSB that it is already known for.