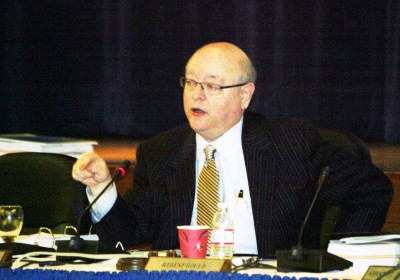 According to the press release attached below, the meeting was canceled due to information provided by law enforcement officials indicating the possibility that “rogue elements intent on violence and confrontation with UC public safety officers were planning to attach themselves to peaceful demonstrations expected to occur at the meeting.”

The meeting has been postponed for an undisclosed later date and possible alternate venue.

The regents were supposesed to discuss and vote on a variety of business items. Included in the agenda was the unveiling of the 2013-2014 UC employment retirement plan, and a vote for the regents to take third-party oversight of the maintenance and well-being of the University of California Santa Barbara campus lagoon.

Announcement from UC Board of Regents leadership

The following announcement was released today (Monday, Nov. 14, 2011) by Sherry Lansing, chair of the University of California Board of Regents, Vice Chair Bruce Varner and President Mark G. Yudof:

Late last week University of California law enforcement officials came to us with concerns about credible intelligence they had collected in advance of the Board of Regents meeting, scheduled for Wednesday and Thursday (Nov. 16 and 17) at the UC San Francisco Mission Bay campus.

From various sources they had received information indicating that rogue elements intent on violence and confrontation with UC public safety officers were planning to attach themselves to peaceful demonstrations expected to occur at the meeting.

They believe that, as a result, there is a real danger of significant violence and vandalism. They have advised us further that this violence could place at risk members of the public, students lawfully gathered to voice concerns over tuition levels and any other issues, the UCSF community, including patients, and public safety officers, UC staff and neighbors of UCSF Mission Bay.

They recommended to us, in the strongest of terms, that we cancel or postpone the meeting as scheduled.

After further consultation with these law enforcement officers, we have decided that, in fact, the most prudent course for us would be to postpone this meeting and reschedule it for another time and, possibly, an alternate venue. Failure to do so might constitute a reckless disregard of credible law enforcement intelligence. Ensuring public safety must be a top priority.

By rescheduling, it is our intent to allow the business of the University of California to go forward, but in a manner that will allow the public, including students, to express their views on issues related to the university without putting their personal safety in peril.

We will be announcing a new schedule for this meeting as soon as possible. We will not elaborate further on the law enforcement intelligence that prompted us to postpone, and we have asked our police officials to do the same.

Finally, we want to point out that the agenda for this meeting included updates from UC staff members on several initiatives that have been launched in an effort to offset state disinvestment in the university, providing alternate revenue streams beyond tuition and taxpayer support. This work will continue to go forward. Contrary to some public misperceptions, a tuition increase was never a part of the agenda for this meeting.