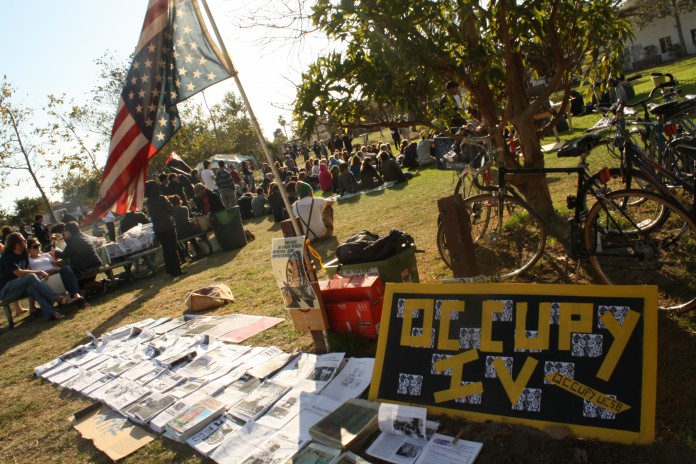 The Isla Vista Parks and Recreation District Bulletin Board added an item of discussion to their Nov. 10 agenda that would establish an assembly ordinance regulating the assembly of more than 10 people from sunset to sunrise in district parks, which would affect Occupy Isla Vista.

Several protesters came to the board meeting Thursday night in an attempt to voice their opinions on this matter, clear up a few misconceptions and attempt to change some minds. Chairperson Bruce Murdock allowed a few public comments on the matter but said that they would not be moving forward with the issue that night and would not respond to any of the comments that were presented as the board had eliminated the item from their agenda.

A few of the protestors involved with Occupy Isla Vista spoke out against the idea of implementing this ordinance bringing up the ideology of free speech, applying this matter to the United States Constitution.

James Glenwright, a fourth-year history and anthropology double major at University of California Santa Barbara and Occupy Isla Vista participant, was met with applause after he passionately pleaded with the board.

“The first amendment says freedom to assemble in public space should not be evaded,” Glenwright said. “So that is something to keep in mind if you further look to pass this ordinance against the right to assemble.”

The ordinance became part of the agenda after Occupy Isla Vista started holding their protests at People’s Park on Nov. 5. People’s Park, which contains a monument that was built during the 1970’s to commemorate peace activism, is no stranger to large assemblies of people.

Michael Schirtzer, a fourth-year history major with an emphasis in revolutionary and conspiratorial history, asked if they’d ever had a problem before.

“There are homeless people who assemble in groups of 10 all the time,” said Schirtzer. “Only now, as a direct response to this protest, have they started to take issue with it.”

The initial response among Occupy Isla Vista participants was confusion and outrage, which caused an inquiry of the board’s motives. Schirtzer himself questions the Isla Vista Parks and Recreation and his initial reaction was in concordance with many questions participants in the Occupy movement have.

“I thought, ‘what kind of audacity they must have that they believe that they have the jurisdiction and the authority to place an assembly ordinance on people in the United States,’” said Schirtzer, “It just shows you how far gone and ultimately disconnected from the people institutions are in this country.”
If the ordinance were to go into effect, it would not happen for months and would not put an end to this movement or protests. Occupy Isla Vista has a back-up plan which will allow the protests to continue.

“We’re going to stay in the park even if this law is passed,” Simone Salmon, University of California Los Angeles graduate and Occupy participant, informed the members of the board and the public. “There is no number you can put on our first amendment rights.”

There is no planned date as to when this issue will be added again to the agenda of Isla Vista Parks and Recreation for future discussion.