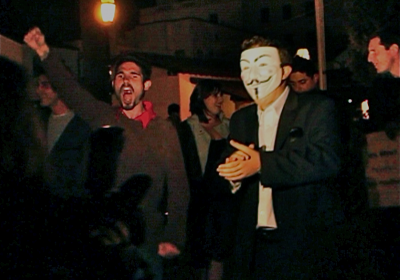 After tabling all day in the Arbor for Occupy Wall Street, conversing with both students and faculty alike, I encountered some critiques I would like to respond to:

“The people in Zuccotti Park look ridiculous because of their outfits, it’s impossible to take them seriously,” said one intelligible gentleman, a self-identified democrat. While the clean-cut, cookie cutter professionals were busy conspiring to defraud and destroy the financial system, the zanier section of the population was left to fill the role of protesting these gross misdeeds. What kind of a society have we become where there are people en masse organizing over their shared grievances with the inequity of the political and economic system, but we can’t take them seriously because of their fashion attire? Frankly, I don’t care if someone protests in a**-less chaps, Bermuda shorts or a Guy Fawkes mask, so long as their message is consistent with regulating corporations, and forcing the federal government to criminally prosecute the financial conspirators.

A reoccurring point was, “when will the protests move beyond reactionary anger to proactive solutions?” This is a valid critique, to some extent. It also serves as a useful rhetorical tool to justify one’s own inaction. I talked to a lot of the students. Undergraduates are not angry enough, or even well informed enough on the issues the world faces. Roughly only one out of six people would even take the time to discuss these problems. This article is only reaching the minimal percentage of students who actively follow news. Once undergraduates are informed and impassioned enough to sustain a cooperative and meaningful dialogue, then we can move onto proactive solutions. One does not learn to run before they start to crawl.

More cynical people claim with self-entitled authority that the movement will not accomplish anything. The movement has already been successful in elevating the dialogue in D.C. and amongst the people. If one had proposed anything to do with taboo issues like campaign finance reform, wealth inequality, or taxing the rich – they would have been cast into the perennial Ron Paul isolation chamber. With people marching and mobilizing, these issues are now on the forefront of political debate. We have the attention of the government, and the support of the people (37 percent according to the latest AP-GfK poll). Not only in Washington, the conversations on the streets are more meaningful. People are talking less about celebrity gossip, and more about why others are so angry.

I would like to stress the importance of being polite and respectful of ones opposition. Not everyone is going to agree all the time, and that is perfectly acceptable. It is what makes debate interesting. Listening, and having to defend ones positions is an opportunity to better assess your understanding of the world, or be forced to adopt an opinion you can support. It’s impermissible to result to ad hominem attacks, so prevalent in both political and the people’s vernacular. It speaks volumes to the motivation of the movement to maintain a respectful demeanor throughout debate and interaction. The facts are on the side of the people, there is no need to editorialize or embellish any of the details. The story is gripping enough as is.

I will conclude by saying we must be thankful and positive. We have the freedom to stand in the street and express our opinion. We have the ability to organize and disseminate information on the Internet. We are not being shot, or overtly brutalized by police in Santa Barbara. Just because it’s worse somewhere else doesn’t mean we can’t make things better here. Such logic can at best keep things static in an unfair state, and at worst, result in atrocity. The United States has afforded most a great many opportunities, of which we are all grateful. We do not take these opportunities for granted. We the people, the 99 percent, would like to make sure these opportunities are available for generations to come.

Michael Schirtzer is a fourth-year history major with an emphasis on revolutionary and conspiratorial history and personal experience in corporate litigation. He is a participating member in both Occupy Santa Barbara and Occupy Isla Vista chapters.