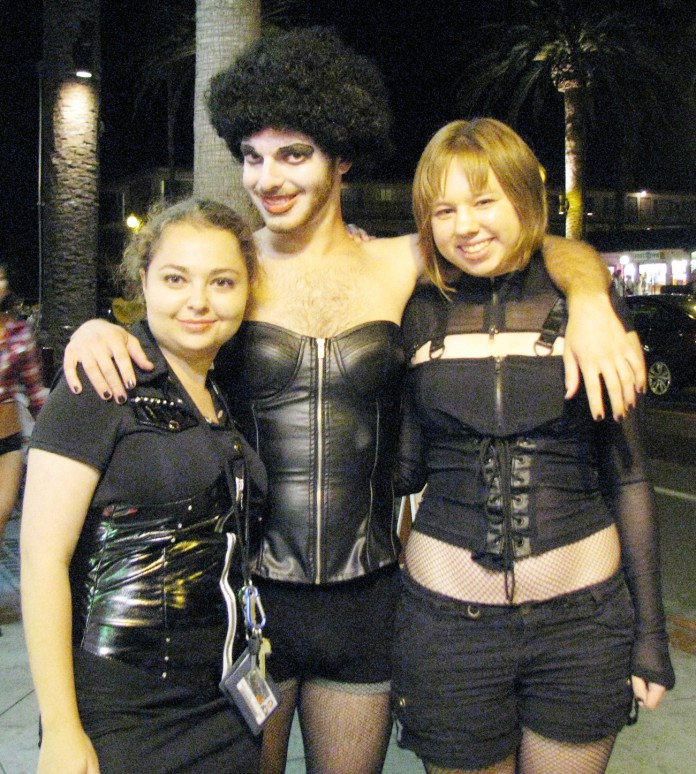 Showings of “The Rocky Horror Picture Show” Friday night attracted newcomers and fans to the cult classic to Embarcadero Hall. Two showings of the film were shown at 10 p.m. and midnight on Oct. 28.

“The Rocky Horror Picture Show,” adapted from the stage production “The Rocky Horror Show,” follows the story of an engaged couple, Brad and Janet, as their car breaks down one dark and stormy night and they take refuge in the castle of Dr. Frank-N-Furter, a self proclaimed “sweet transvestite,” populated with strange characters, including the doctor’s muscled creation, Rocky. While the movie did poorly when it was first released, it gathered a cult following once it was put into midnight screenings. Eventually, audiences were going to these screenings dressed as the characters and shout back lines and smart-aleck comments at the screen at certain parts, and the film has been continuously shown in theaters since.

The Isla Vista audiences were anxious to see it, especially for the audience interaction the movie is known for. Some people said they expected the show to be something along the lines of “amazing,” or “awesome.” History major Jeremy Gainsberg said he had expected, “utter and complete chaos.”

It would seem as though these screenings did live up to the reputation. While there were mutterings from some fans of the show being somewhat quiet, generally, the audience still seemed to enjoy it.

“It was awesome as always,” said first-year Cambria Wells, a psychology major.

Reactions afterward were rather positive towards the spectacle.

“It was so much more entertaining than watching it at home,” said Laurel Shaddix, a first-year english major.

Rebecca Anguiano, undeclared, agreed. “The atmosphere contributed to the way I enjoyed the movie,” she said.

Some audience members appeared to be fairly creative too.

“There was a part where [the character] Riff-Raff would say ‘You see,’ and the audience would say ‘S.B.,'” said Isla Vista resident Shaddix after the 10 p.m. showing.

So what exactly brings people to Rocky Horror again and again? Wells said the movie had a “sense of forbidden fruit” to it.

“There’s really no other show like it. The people are the nicest and weirdest I’ve ever met and the most true to themselves,” said fan and Isla Vista resident Allegra Bottlik.

UCSB Dining Commons: Where Will You Earn Your Freshman 15?

“Manchester” Wrings Your Heart Out to Dry