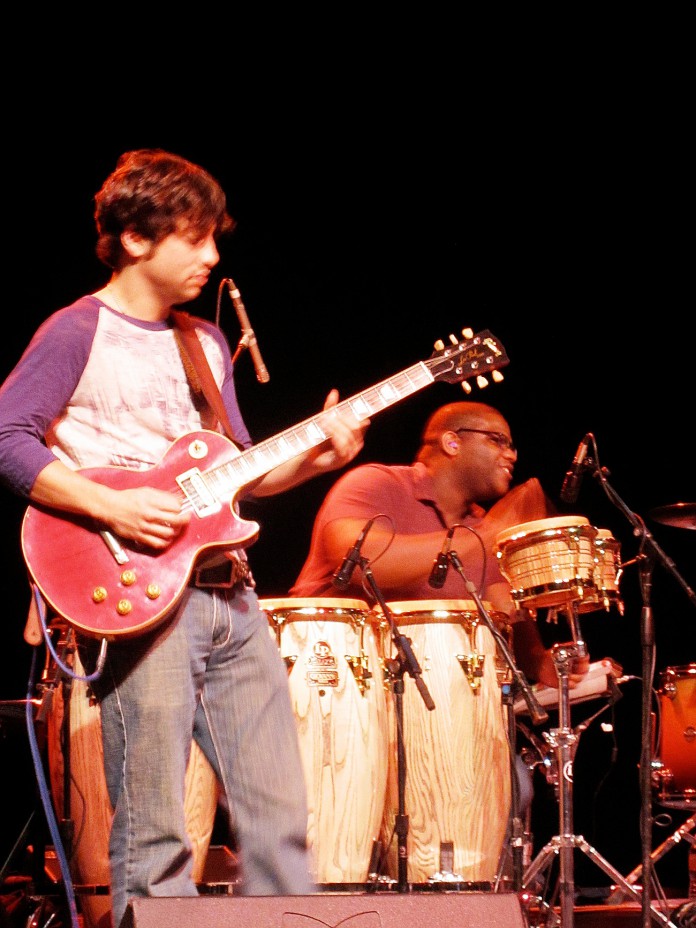 Trombone Shorty & Orleans Avenue’s performance on October 7 showed that this year’s
UCSB’s Arts & Lectures Fall program is off to a great start. This creative group of superstar musicians, headed by Troy “Trombone Shorty” Andrews, has performed over 200 shows, touring nonstop in places such as Brazil, Japan, and England since the release of their 2010 Grammy-nominated debut album ‘Backatown’. With the release of their second album ‘For True’, which features special guest artists such as Lenny Kravitz, Kid Rock, and Ivan & Cyril Neville, Trombone Shorty & Orleans Avenue (TSOA) ventures towards new and exciting horizons.

The first thing you may notice at one of TSOA’s performances is the raw talent of the band. The musicianship of each member should be considered equivalent to a grandmaster level in Kung-Fu.

Drummer Joey “In And Out” Peebles blasts around on his drums so quickly that the wind coming off his sticks blows his flowing locks into the air. Pete “Freaky Pete” Murano nonchalantly shreds around on his guitar like it’s nobody’s business, which is, in fact, rather freaky. Just as you find yourself groovin’ to the funky rock of these two, Dwayne “Big D” Williams comes in, palming some spicy Latin rhythmic textures on his congas. Next, the dual virtuosos, tenor saxophonist Tim McFatter, and baritone saxophonist Dan “Uncle Potato Chip” Oestreicher, battle it out, trying to play the funkiest riff imaginable. Bassist Michael “Bass” Ballard ties the sounds together with his rumbling undertone of rib-shaking bass lines.

Just as your eardrums can’t handle any more dynamic layers of sound, out comes
Troy “Trombone Shorty” Andrews from backstage, double-fisting both his beloved trombone and his trumpet high in the air. He mounts his trombone on his shoulder like a machine gun, and blasts a solo at your face.

A roar of applause answered back immediately after Andrews’ first notes of the
performance. From that point on, with an indefatigable embouchure, Andrews played flawlessly for 90 minutes, mixing it up from time to time with trumpet and vocal contributions. His unbelievable style and inventiveness contribute to a truly unique sound. At one point during the show he even held a single, unwavering note for a good three minutes straight! That might actually be a record. The amount of talent involved here truly defines him as a prodigy.

This 25 year-old phenomenon displays an intimidating talent, but during the warm-up for
the show, Andrews showed his compassionate side.

Along with a mostly college-aged crowd, several musically inclined students from junior high were in attendance to a meet-and-greet event with Trombone Shorty that took place while the band was warming up before the show. After the band was ready, Andrews invited three of the students, who had brought their own trombones with them, onstage to play along with the band in an impromptu jam session. The students, Ruby, Robin, and Carlos, scrambled onstage and nervously unpacked their trombones.

“Uh-oh, that looks nicer than my horn, we might have to do the switch-a-roo,” Andrews said to the quavering student standing beside him.

He then began with a light jam, playing some repeating notes for the students to mimic. The quartet played in unison for a few minutes, and then Andrews encouraged each to go ahead and break out into their own solos. When it was Carlos’ turn, he bashfully hesitated. After some encouraging words by Andrews, the young musician let loose with a few spontaneous notes. The look of joy that came over Carlos’ face was priceless.

Andrews’ rare passion for individual musical expression was inspirational to behold, onstage and off.