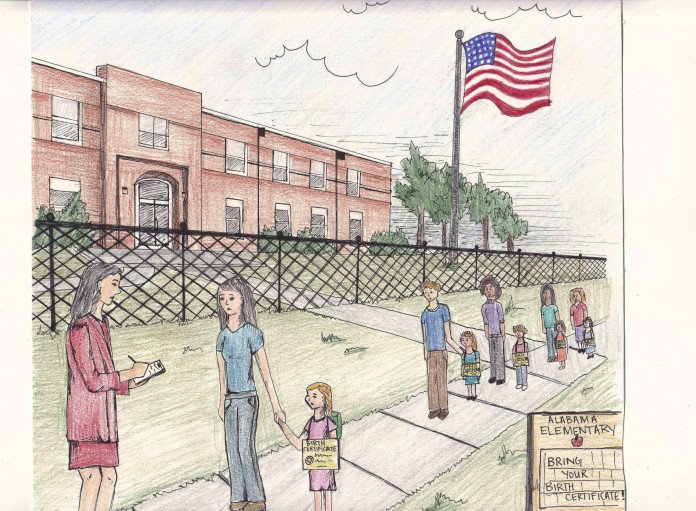 The Alabama immigration law that was approved this summer only goes to show the varying levels people are pushed to in times of desperation.

During World War II, America locked up citizens and “aliens” of Japanese decent within the “war zone” of the West Coast, victimizing them and holding them accountable for actions committed by people on the other side of world, people many of them had no contact with.

Now, in a time of high unemployment and a recession we as a nation can’t seem to shake, Alabama turns its attention to Hispanics under the pretense of promoting jobs for legal immigrants and citizens, hoping a law requiring students to provide proof of citizenship prior to enrolling in education and forcing state and local officials to demand verification of a person’s immigration status during traffic stops will increase these grand job opportunities. Because a college educated citizen would be more than happy to pull potatoes and kill chickens in a factory, right?

The law is racist, simple as that. Claiming that it’s designed to discourage illegal immigrants from being hired instead of legal citizens is nothing more than a cover for this racism. Despite popular belief, Canadians sneak into the country too. So do Europeans. It happens with white people too, but Mexico’s close proximity allows us to ignore this and leave the white illegal immigrants as the minority of the minority. They also have this odd tendency to look exactly like white people. Strange.

The true victims in this law aren’t even the illegal immigrants. There were already strict punishments for individuals discovered to be illegals and this new law, with no new punishments for hiring illegal immigrants, inflicts more fear than actual change and legislation. Hispanics in Alabama, regardless of the status of their citizenship, are now afraid to go outside, afraid to drive their children to school because they’re illegal even if their children aren’t.

It’s the children suffering from this, with hundreds missing school and cutting classes because they don’t know if their own teachers will turn on them and demand a birth certificate. I don’t know about you, but personally, I didn’t even know what my birth certificate looked like until I needed it for my driver’s license. To expect elementary school students to carry around proof that yes, they belong here is not only unreasonable, it’s irresponsible.

Imagine an officer coming up to you in IV and asking for proof that you’re a citizen, proof that you belong in the country you were born in and spent your whole life in. And everyone who looks like you is asked the same thing, thrown into jail if they don’t have the right papers with them. It’s cruel and detrimental to the mental health of young children who did absolutely nothing wrong.

I understand that illegal immigration is an issue and politicians feel the need to at least make it seem like they’re doing something to decrease unemployment, but the Supreme Court already decided in 1982 that states can’t deny free public education to undocumented immigrants. So maybe instead of wasting their time yelling at the people who pick their fruit for wages that hardly cover the cost of food, the people of Alabama could focus on changes that promote growth in areas other than racism.