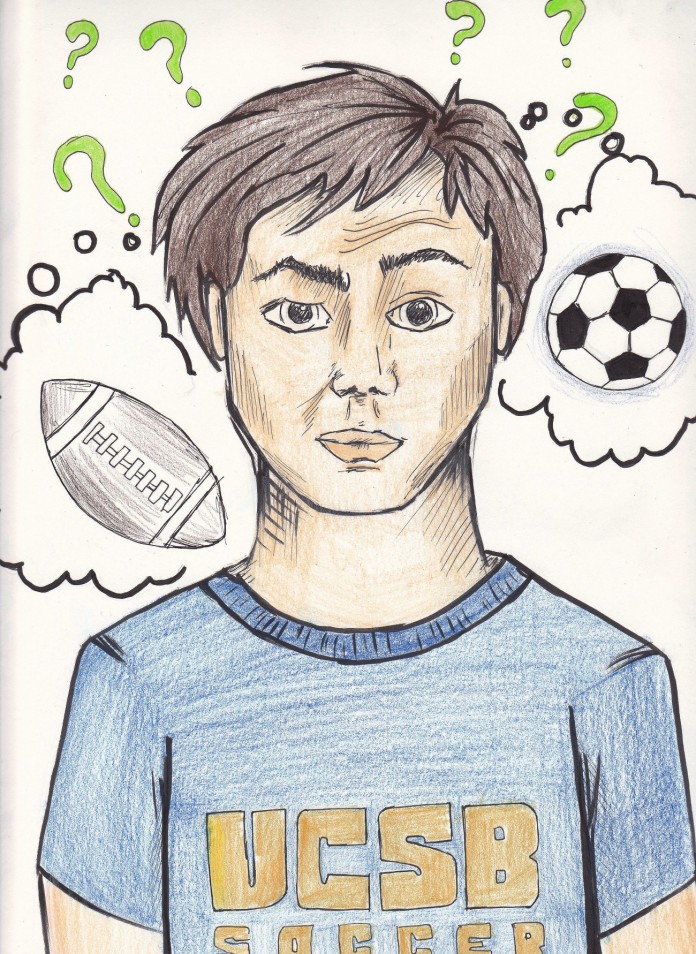 Undefeated, non-existent, that’s kind of the same thing, right? Many would beg to differ, especially with all the college football coverage on television these days. I can’t watch TV without coming across some football highlights or scroll through my Facebook news feed without seeing pictures of my friends at schools like USC and Southern Miss tailgating and excited about their football team. It sure would be nice to see Olé on TV a little more often!

Discussing the absence of a major football program at UC Santa Barbara is bittersweet for me. As a former cheerleader, I cannot deny missing Friday Night Lights and Homecoming Games dearly, but as a former soccer player as well, I have an undeniable love for “The Beautiful Game.” As much as I love seeing gorgeous and lean soccer players around campus, I couldn’t help but wonder, why doesn’t UCSB have buff guys dedicated to throwing around the old pig skin?
“Actually, UCSB has had football twice in its history,” said Chancellor Henry Yang. “Most recently football was dropped in 1991 after the NCAA notified UCSB Intercollegiate Athletics that in order for the football program to continue, it would have to compete at the Division I level. Up until then, UCSB was Division I in all sports except football.”
Football programs are expensive, costing millions each year for schools that host them- which is not a problem for private schools like USC with generous alumni donations. With all the fee increases UCSB is enduring, I don’t think we can afford to install a whole new program.

Granted, Harder Stadium was the home of the original Gaucho Football team and was named after football coach Theodore “Spud” Harder, but UC Santa Barbara simply does not have the facilities to welcome a football team to our campus. We’re talking staffing, office space, insurance, training facilities and equipment, and recruiting, to name a few.

It would be a complete overhaul of our athletics department, making it very unlikely that UCSB will have football helmets sporting our logo anytime soon.

There is quite a bit of buzz online regarding a supposed movement to bring football to schools like UCSB and Cal State Long Beach, providing a space for die-hard Gauchos to express their opinions on the matter. However, UCSB’s Athletic Director claims he has not been approached about anything like that.

“Every school wants to compete at the highest level, football program or not. We’re really happy with the sports we’ve got and we’re making them the best in the Big West Conference,” said Massari.

Still, students seem to think a football team would only benefit the school.

“I think we should have a football team because we are a big party school and we would definitely come out and support it. Other UC’s have football programs. It would just make everything else a really fun time,” said Jonathan Kantor, fourth-year English major and usher at the Gaucho soccer games.

We were recently ranked number five on the Princeton Review’s 2012 Party School Rankings. All of the schools before us—Ohio, Georgia, Ole Miss, and Iowa—have football teams. So do the 10 schools ranked after us. I think this is not merely coincidence. Having a Division 1 football team would give us so many more reasons to celebrate!

UCSB alumnus Marc Brody, class of 1984, weighed in on how the football team affected school spirit during his undergraduate years. He claimed football did well but basketball was on the rise in the mid-1980s; that was when the Thunderdome got its name- from the rowdy cheering of students.

“At that time the students were all about loyalty to IV and each other anyway, so there was plenty of support,” said Brody.

If you think about it, soccer is less expensive to maintain than football and has raised a lot of money for the school. There is no doubt we have Gaucho Pride for our team, with the golden sea of the Gaucho Locos never leaving a moment of silence at the soccer games. General attendance is large. Over 9,000 students attended the game against UC San Diego and each game averages about 3,000 students attending, according to Massari. These numbers are on par with average football attendance at other colleges. So we have as much school spirit as those darn Iowa Hawkeyes if not more!

“We are very proud of the support the students, faculty, staff, alumni and community give our athletic teams,” said Chancellor Yang. “My wife, Dilling, and I attend games as often as we can and we cheer our hearts out for all our student athletes and our teams. Our teams receive support from so many different quarters, including the Gaucho Locos, the cheer/dance teams and the pep band. The students who participate in these activities are a vital and important part of the overall intercollegiate athletics experience at our campus. We appreciate the time and effort they dedicate to supporting our teams and their fellow students. You may know that we hold five NCAA records for attendance, all in support of our Men’s Soccer Team. All our intercollegiate teams and for that matter, club sports teams, would not be as successful without this wide base of support.”

The fact that soccer is such a big deal on our campus says a lot about the environment we foster. Soccer is known worldwide as “The Beautiful Game” because it is a game that requires passion and anyone- of any size, age, experience level, language- can grab a ball and start kicking it around, initiating a game of soccer. Whether it is on the field of Manchester United or the streets of Rio de Janeiro, soccer is a game that connects people who are driven to be great. UCSB is definitely Soccer Heaven. Just look at the many gauchos whose dreams have come true on Meredith Field, like Chris Pontius who went on to play for D.C. United and Dan Kennedy, who plays for Chivas USA. Our school is unique and a place where we’ve been brought together because we are passionate about something and, of course, looking for a good time. Soccer represents that. So, forget the fee increases, we don’t need a football team. Just pass me a pack of tortillas.