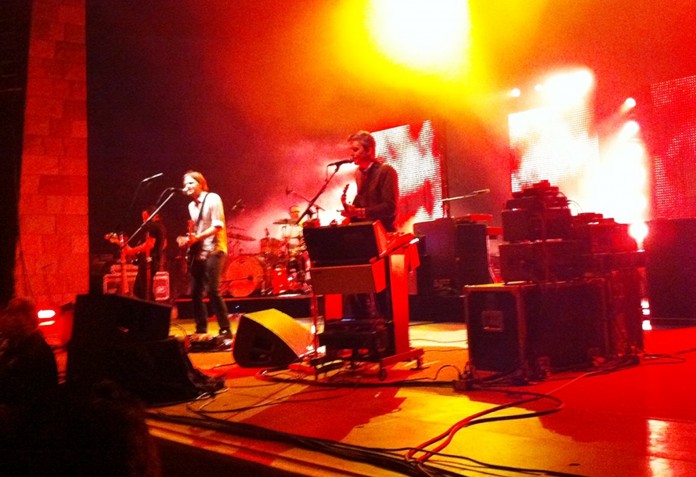 The alt-rock tunes of Death Cab for Cutie and the delicate rock instrumentals of Explosions in the Sky proved to complement each other wonderfully during a crisp night at the Santa Barbara Bowl on Saturday, Oct. 15. Spectacular performances and strong musicianship from both bands made for quite the satisfying evening.

Explosions in the Sky, the four-man opening band of the show, garnered some crowd attention by being featured on the soundtrack to the TV show “Friday Night Lights” in 2004. Their passion at the Santa Barbara Bowl was clear during the performance, strengthening the emotion conveyed through their purely instrumental music. This distinctive style, especially unique in the realms of music popular with young adults, lacks vocals and therefore depends on its gorgeous melodies to sound fantastic- which is never a problem for the band.

The energy of the already exhilarated audience was further boosted by the entrance of the group that most of the spectators paid to watch, Death Cab For Cutie. They emerged just after 8 p.m. with the full version of “I Will Possess Your Heart” from their 2008 album “Narrow Stairs.” The prolonged instrumental opening of the song allowed for an even greater anticipation buildup before the best-recognized face (and voice) of the band- Benjamin Gibbard- surfaced.

The Washington-native band continued with a set list combining their widely popular songs (such as “Soul Meets Body” and “I Will Follow You Into the Dark”) with some favorites of the more devoted fans (“A Movie-Script Ending,” “Title and Registration”), as well as some tasty bites from the new album “Codes and Keys”, which was released in May 2011. Colorful lights projected onto the products of a fog machine turned the stage into a suitable backdrop to the music.

Each of the four members of the band executed their musical roles with infectious and effortless fervor. Their performances, along with the uncontaminated quality of the music, resulted in a phenomenal concert. No gimmicks or tricks- just excellent music, and passion for it. So many other bands that fill auditoriums rely on the glitz of expensive set pieces and special effects to entertain their fans, but the talent of Death Cab For Cutie made these things unnecessary, resulting in an extraordinary show.

Nearing the end of the set, Gibbard comically interrupted the concert to ask the crowd, “You guys really like smoking marijuana, don’t you?” and proclaimed the Santa Barbara audience the winner if their concerts were a “weed-smoking contest.” He then ended the tangent from the music by expressing his approval.

Death Cab For Cutie ended the show with the catchy crowd-pleaser “The Sound of Settling,” and then finished it off with a four-song encore that concluded sleepily, but definitely well with “Transatlanticism.”

The band’s selection of music satisfied the audience from start to finish, providing a strong flow for a show that represented the band magnificently while entertaining the audience to the highest degree. Paired with Explosions in the Sky’s breathtaking opening, these performances successfully added up to an enjoyable night of exceptional talent.