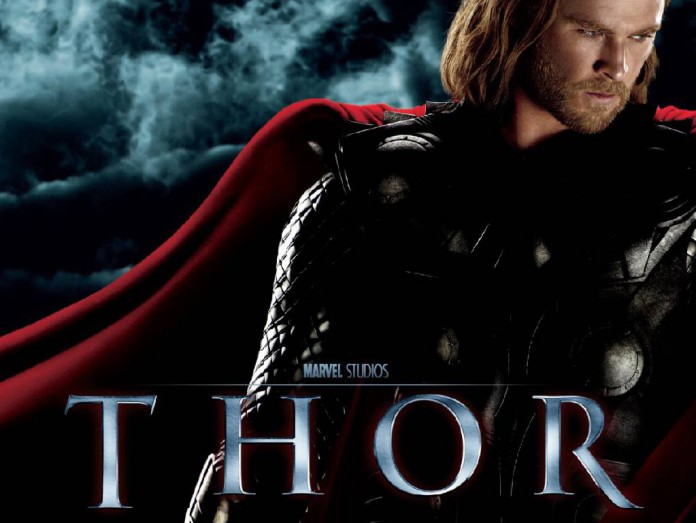 Creating superhero films are a delicate balance of making the character and their mythos accessible without alienating the comic fans. However, if walking that line becomes too difficult Hollywood will just default to making a flashy action flick. This is the case with “Thor.”

While I may not be thoroughly well versed in the “Thor” universe, the film changes some fundamental plot elements. The basic premise of the story is the arrogant young Thor (Chris Hemsworth) was next in line to become king of Asguard, but when he seeks a fight with the race of frost giants that Asguard had a treaty with, King Odin strips Thor of his powers and iconic hammer and banishes him to Earth. Once on Earth, Thor begins to learn the error of his ways (some how) and eventually defeats his traitorous brother to regain his kingdom. The story is simple enough and is pretty straight forward.

Where the film omits is a very important element. When Thor gets to Earth he does not know of his past life on Asguard. In the comics he is placed in the body of the disabled Dr. Donald Blake. It takes years of life and struggle on Earth before Thor even becomes aware of his royal heritage. While I cannot exactly blame the film makers for wanting to shorten the time line of events, they instead have Thor’s journey (as a depowered form of himself) last about a couple of days. The film’s plot does have a bit of urgency to bring Thor back to battle his evil brother, but there is no way that the audience can reasonably believe that Thor suddenly learned the error of his ways just in time to save the day. This brings us to the reason for our hero’s transformation, the love interest Jane Foster (Natalie Portman.)

Foster’s character undergoes a change as well, but this change is actually a strength of the film. In the the source material, Foster is a nurse who originally works under Dr. Blake. In her original incarnation, Jane was caring and compassionate, but did not possess the same kind of fervor that Thor did until much later in her life. The film’s interpretation on the other hand transforms Foster’s character into a passionate, highly driven astrophysicist who spends most of the film researching cosmic events. These are the same “cosmic events” that bring our hero to earth, such as the magical inter-dimensional bridge known as the Bifrost. This is quite a refreshing change from the archetypical damsels in distress found in other super hero films. Despite this, seeing such a smart and driven character fall in love with a man who literally fell out of the sky serves to hurt the strong image that the film crafts at the beginning.

Glimmers of hope for a better film popping up appear to be a theme through out. The film’s greatest is various references to the larger marvel universe. We all know that these films (“The Incredible Hulk,” “Iron Man,” and “Thor”) are meant to establish the characters that will come together in the a later film “The Avengers.” These little hints at illusions do a great job of not only creating a world, but spark interest in these other events. For example Erik Selvig (Stellan Skarsgard), Jane’s mentor in the film speaks in passing of a colleague whose work on gamma radiation attracted the attention of the secret government agency S.H.I.E.L.D. which makes a much larger appearance. All the references in the world though, could not make up for “Thor”’s biggest problem, it simply does not feel like a superhero movie.

A superhero movie, especially the first one for a given character, needs to tell a good origin story. This is usually aided by the fact that the film makers have source material to pull from. In “Thor” however, we get a heavily altered version which is lacking. There is very little character development of our hero through the course of the film. An origin story needs to show how any why the hero begins crime fighting. Admittedly this is different when our hero in question is a essentially a god. Even so a god losing his powers and learning humility is a solid story, but the audience does not even get this much.

Thor’s time on earth is barely even a weekend. He spend literally two days on earth and we are expected to believe that he has become changed and now has the ability to rule as king. The only change is that Thor simply gets his powers back and this is another point of contention I have with the film.

Continuing with a lack of “Thor” feeling like a superhero movie the fight scenes are very dull. They are exciting visually, but of course who did not expect that? Thor is either obscenely powerful to the point that watching him fight is boring or he is so weak that he literally gets slapped around. There is very little dramatic tension when fights are this one sided. Sure, the hero is supposed to rise to the top eventually, but there is very little reason to care when fights end so quickly and decisively. Never do they feel climatic at any point and at the end the audience is left wanting more.

This is probably the best way to sum up the film, you’re left wanting more. I do not mean more of the film. I wanted more substance. There where too many missed opportunities and plot points dropped. I hesitate to call “Thor” a bad film as the two hours flew by, but once it was all over this comic nerd was left thinking this film could have been so much more.