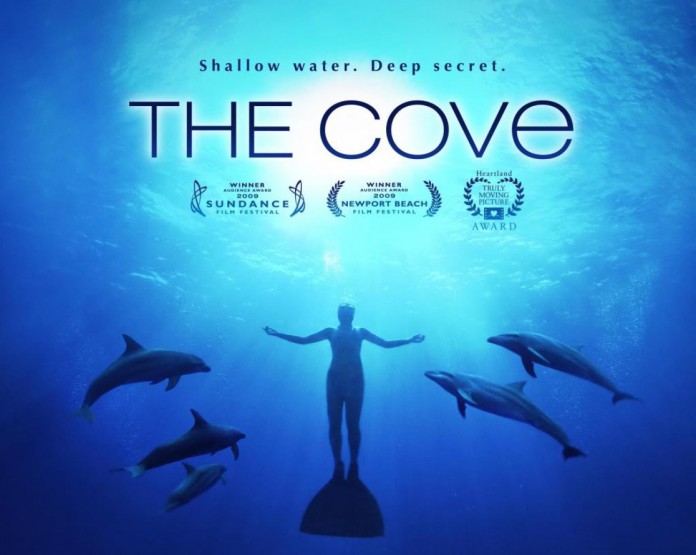 On Saturday, May 21, CALPIRG presented “The Cove”, the Academy Award winning documentary detailing the dangerous mission a group of activists and filmmakers undertook to expose the horrendous dolphin massacres that took place in Japan’s Taiji Cove.

After the showing, Craig Tsuyumine, of Save Japan Dolphins, led a brief discussion about the film. He detailed the efforts that have and should be taken to end the capture and killing of 23,000 cetaceans, which are dolphins and porpoises, a year.

One of the subjects of the film, famed dolphin trainer Richard O’ Barry, holds himself personally responsible for popularizing the idea of the captive dolphin due to his work on the show “Flipper.” Over time, O’ Barry realized that dolphins cannot lead a happy life in captivity and since then he has dedicated his life to freeing every dolphin he can, no matter the cost. He has been arrested countless times and banned from a variety of organizations all over the world including the International Whaling Commission.

“I must see this end in my lifetime,” he said at the close of the film.

The cove in question is located on the coast of a small fishing community known as Taiji. It boasts a love for dolphins and whales, offering a variety of tourist attractions surrounding the majestic mammals. Yet just around the corner, thousands of dolphins are forcefully herded into a secluded cove to be slaughtered by Japanese fishermen.

Many might mistake “The Cove” as an attack on Japan and its culture, but the directorial intent seems quite the contrary.

“Louise Psihoyos saw it as a love letter to Japan,” said Tsuyumine.

Psihoyos, the director, hoped to not only raise awareness of the brutality committed against the dolphins in Taiji, but also educate the people of Japan about the amount of mercury their government is allowing them to consume and sell. Dolphin and whale meat is dangerously high in mercury, yet the Japanese government allowed dolphin meat to be given in school lunches in order to support the fishermen. The policy has ended since the film was released. Subsequently, many actions have been taken to end the crimes committed, but each September, blood still flows out of the cove.

Nets flung over bodies, tail fins flapping helplessly, the ocean churning with blood; these are the images that sear themselves into the viewer’s mind. The squeals of the dolphins ensnare and break the hearts of all who hear them. One could not help but feel the strong compulsion to do something to end the suffering of these innocent creatures. By the end of the film I realized I had been gritting my teeth and clenching my fists in anger; in that way the documentary is extremely successful.

Similar movies like “Food, Inc.” depict the cruelty and abuse that goes on behind the scenes of factory farms, leaving the viewer swearing off meat, yet this usually lasts until the next meal. Cows, pigs, sheep, and chickens are brutally slaughtered everyday on American soil. People are grossed out by how their burgers make it to their plates, but often they do not feel the same compassion as people seem to feel for the dolphins. Where is the call to arms against the blood baths occurring in American factory farms? As humans we are responsible for promoting humane practices among ourselves and among all species, so we must recognize our wrongdoings and take action to put an end to those wrongs.