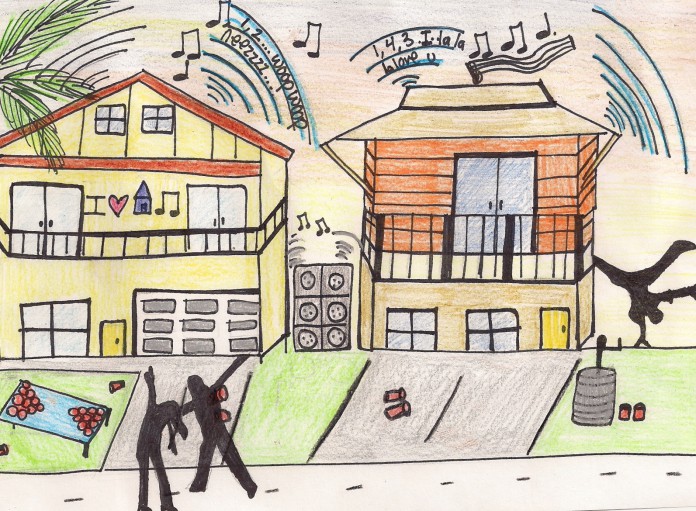 On a typical Thursday through Saturday night, the streets of Isla Vista, CA, are filled with people as they search for a party to crash. Even people new to IV are able to walk around and easily find a party to attend. Normally, through the racket of cars honking, girls screaming and men yelling at the girls that are screaming you can still hear two distinct types of music: Hip Hop and Dubstep.

Through my research on the Internet, I found out that Hip hop originated in New York City during the 1970’s in African-American communities where disk jockeys first began looping songs together and called it “sampling.” Beat boxing and rapping were also a part of the movement. The hip-hop and rap we hear a lot today are actually in another category themselves: Alternative Hip-hop/Rap. This subcategory refuses to fall for any main strain and stereotypical themes that rap icons like Biggy Smalls lay down before them. They avoid gangster themes, rage and hardcore raps. Instead they go for a more reggae, funk or even electric feel. Artists like this are Kid Cudi and Drake, who use the internet as a way of getting their alternative sound across the world.

But do people only go to parties that have the music they like?

“I haven’t really been faced with that question, but I know people who won’t go to a party if it isn’t playing the music they like. Once a guy tried to change the music at a party from hip-hop to dub step… bad idea,” said Jacob Harrold, a second-year Film Studies major at Santa Barbara City College.

Dubstep is known for its astounding baselines and repetitive drum beats. This genre was born in London but has since spread worldwide and in each place, the genre grows its own style.

“In moving to IV from the Central Valley, music changed greatly. The introduction of Dubstep just changed me. With rap the point is to ‘be tough’ but with Dubstep you feel the music. Hard to explain what it does to people but they just ‘let go’ in a sense let the music take control,” said John Luke Sanchez, another second-year Santa Barbara City College student.

Kenjamin Ho, a third-year Geo-hydrology major at UCSB, has been a DJ for a year now and is also a founder of the DJ club on campus. Ho has played in IV, on campus and also for neighborhood parties in Los Angeles.

The increasing popularity of EDM (electronic dance music) and computer software such as Virtual DJ, which makes it easier and more affordable to learn to DJ, has also led to more DJs in IV. According to Ho, this makes it more likely that people who are hosting a party know a DJ that can play at low prices due to the competition between DJs to perform.

Because Isla Vista now has a noise ordinance, DJs are required to stop playing music at midnight. At a party on Sichio this past Friday night, when the outdoor DJs stopped mid-song at midnight, anger commenced and partiers tried to get into the frat’s house by lifting and opening the garage door from the outside.

The dancing that these two music genres inspire is also very different. Hip Hop is more grinding and has slow moves as well as booty shaking beats.