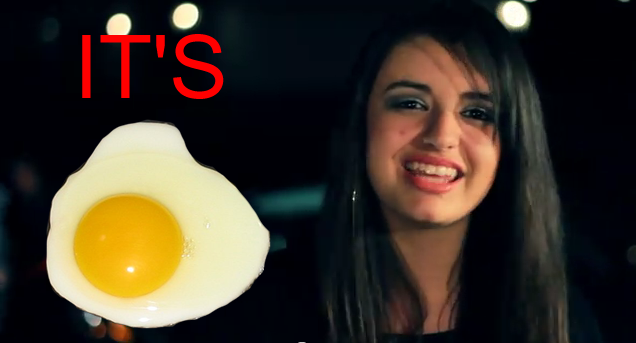 Thirteen-year-old Rebecca Black is the newest member of Internet memes thanks to her song, “Friday.” My friends showed it to me about a week after it was posted on YouTube and we had fun pointing out her uncomfortable facial expressions and discussing how poor the plot was. Who debates about which seat to take when it’s clear that only the back seat is available? I would have never thought that this video would go viral. On March 11, 2011 the view count stood at about 4,000 views and by March 21, 2011, it had over 69.8 million views.

Patrice Wilson and Clarence Jay foounded ARK Music Factory, a vanity record label located in Los Angeles, California. Before anyone else sarcastically calls Rebecca Black a lyrical genius, I want to point out that co-founder of ARK Music Factory, Patrice Wilson, wrote the lyrics to “Friday” and also appears as the rapper in the video. The label focuses on discovering new talent and has a website that features a profile on singers they have worked with. The website also provides opportunities for artists of all mediums to network and interact. The cost for a song and music video ranges anywhere from $2,000 to $4,000.

As of April 5, 2011, Black’s music video had over 85 million views on YouTube. Its popularity has spurred parodies, hateful comments and still photo shots from her video have been edited to ridicule the song and its lyrics. Personally, my favorite lines are:

“Yesterday was Thursday (Thursday),
Today it is Friday (Friday),
We, We, We, so excited,
We so excited,

The song provides many opportunities to make jokes. Several images show fried eggs photo shopped over Rebecca Black’s face in reference to people saying that the way she sings “Friday” sounds like “fried egg.”
I asked a few students at UC Santa Barbara what they thought about Rebecca Black’s song and her success.
“I think she’s slightly overrated, but I think she’s done well for herself considering the circumstances,” said Film major Kaitlynn Romain.

Geography and Business Economics double major Lisa Berry was shocked at the content of the video.
“My boyfriend Trevor showed me the music video and the whole time I asked him if they were serious about making a music video like that. I mean, honestly I thought it was a joke and thirteen-year-olds shouldn’t be singing about partying,” she said.

Despite the negative response Rebecca Black has had, she remains confident in her abilities as a singer and is moving forward with her career. On March 26, 2011, music news website NME announced that she is working on a new single called “LOL” and plans to release an album sometime next year. During her interview with NME, Black claimed she will stay true to herself.

“I like the fact I am singing like a 13-year-old girl, not trying to be anything else. I would consider some [songs on the album] teenage love songs but I want to keep it appropriate and clean,” she said.
Even though I am not a fan of the lyrics and the sound of her overly auto-tuned voice makes me cringe, I praise Rebecca Black for pursuing her dreams and hope she uses her next song as an opportunity to change her image for the better.