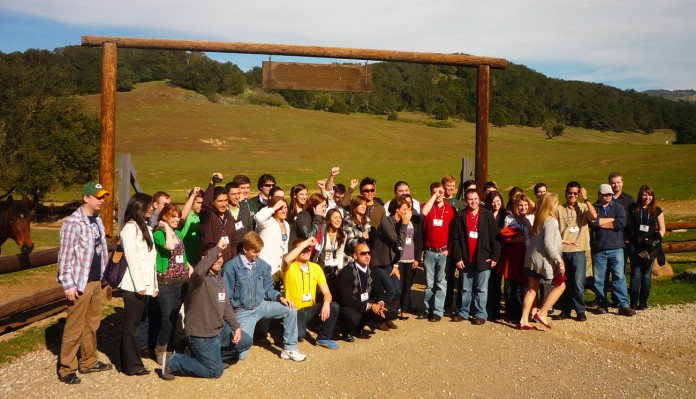 Young conservatives gathered from across the country at the Reagan Ranch Center in downtown Santa Barbara from February 3-5 to attend Young America Foundation’s “Summit to Restore Freedom.”

Created in 1969 at Vanderbilt University, Young America’s Foundation (YAF) has become the premier organization for the promotion of conservatism on college campuses. In 1998, YAF stepped forward to purchase President Reagan’s home at Rancho del Cielo (Heaven’s Ranch), located 40 minutes from Santa Barbara in the Santa Ynez Mountains. Summit participants were given the unique opportunity to visit the ranch, which has been said by some to be the physical manifestation of Reagan’s philosophy: “If it isn’t heaven, then it’s certainly in the same zip code.”

“I really enjoyed being at President Reagan’s Ranch and learning what a humble man he was. He could have had anything he wanted, yet he chose to live in a way that reflected his true love for liberty and it made me realize what it takes to be a true leader of our country,” said Mary-Kate Kelledy, a summit attendee from Azusa Pacific University.

In addition to having the chance to learn more about President Reagan’s ideals through a visit to his ranch, summit attendees were treated to numerous seminars and discussions with leaders of the conservative movement. These included bestselling author Peter Schweizer, international radio personality Mark Larson, YAF Vice President Patrick Coyle, and Kate Obenshain, YAF Vice President, Fox News contributor and former Chairwoman of the Virginia Republican Party.

“Being a political minority on campus is at times discouraging and frustrating. However, learning more about Reagan’s principles and ideas, and meeting and listening to many great conservative speakers has emboldened me to continue standing up for my principles and try to expose others to a different view point,” said UC Santa Barbara student Morgan Weber.

In her tribute broadcast on CNN, CSPAN and Fox Friday night, Governor Palin sought to channel the spirit of the famous “Time for Choosing” speech, which President Reagan delivered to promote 1964 GOP Presidential candidate Barry M. Goldwater. The speech is credited with propelling Reagan to the Governorship of California, an office he won just two years later.

Vice President Cheney, appearing on Saturday night, recalled his impression of President Reagan and how it shifted over time. As Chief of Staff to President Gerald R. Ford (the incumbent that Reagan challenged for the Republican nomination in 1976), Vice President Cheney admitted that he initially regarded Reagan with a high degree of skepticism. Later on, as the U.S. Representative from Wyoming, Cheney’s perception shifted as he said he witnessed how Reagan skillfully used his charisma to push through the biggest tax cut in American history.

Both Governor Palin and Vice President Cheney were greeted by a small group of anti- war protestors who shouted insults and charges of fascism to people entering the building. Governor Palin was also greeted by a group of supporters, mostly composed of Tea Party activists and “Mamma Grizzlies.”

Despite some complications, most attendees agreed that the Summit to Restore Freedom was a success.

“I thought it was great to meet other conservatives,” said Pat Garrett of Marquette University.

“I really appreciated the opportunity to be surrounded by other individuals who are fighting the same fight on their respective campuses. It was awesome not only to receive information from YAF and their speakers but also to share ideas with each other based on recent experiences,” she said. “Just being in the beloved ranch of President Ronald Reagan drove home his ideas of liberty and gave me an even stronger desire to fight for what he stood for.”