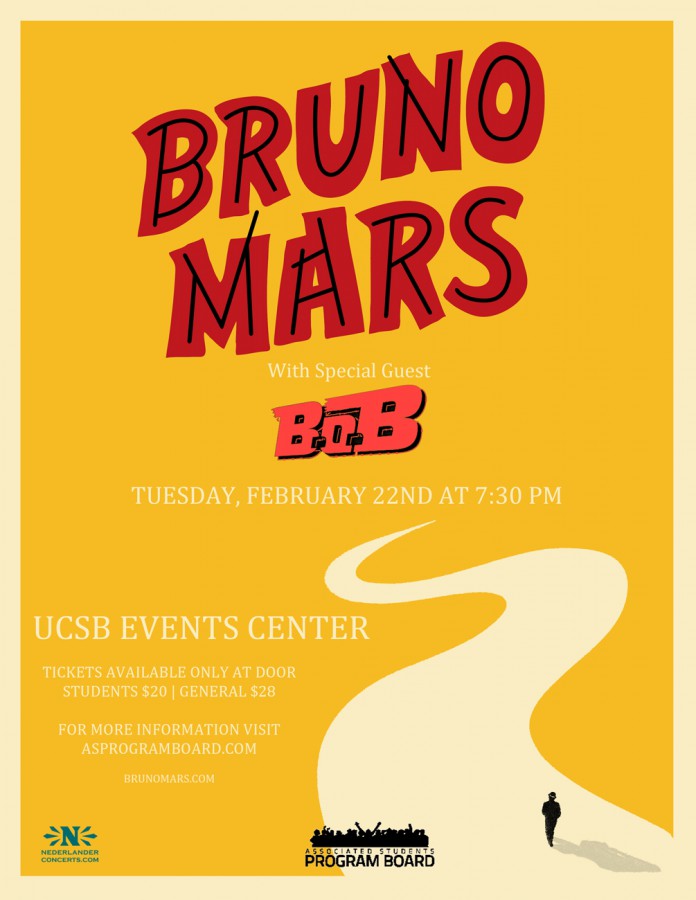 Students are now aware that the advertised Bruno Mars concert at UC Santa Barbara was a hoax. While the event appeared to be sponsored by UC Santa Barbara’s Associated Students Program Board, this nonexistent concert turned out to be a student project for Art Studio 7D: Art, Science, and Technology regarding “Hacking a Network.”

Grammy Award winner Bruno Mars was rumored to perform on Tuesday, February 22 at UCSB’s Events Center. The Facebook event, “Bruno Mars at UCSB,” was created by a phony UCSB Associated Students account and managed to attract over 600 attending guests to the fake concert.

Despite the large number of attendees, many who confirmed their attendance seemed unsurprised and nonchalant about the spoof.

UCSB third-year student Kevin Adono, who works for A.S. Program Board, confirmed his attendance to the hoax concert regardless of his disbelief.

“I just clicked [‘attending’] for fun, didn’t really care. I kind of thought it was fake because I work for ASPB and never heard anything about it before,” said Adono.

Despite the event page’s flaws and suspicious ambiguity, the surprisingly high number of attendees continued to increase.

UCSB Art major Kevin Alcantar, the creator of the Bruno Mars project, released a statement in the “Results” section of his project website.

This fake Bruno Mars event caused considerable commotion with A.S. and A.S.P.B. but little action was taken to find the perpetrator or shut down the event page.

“To date, I have not yet faced any consequences from creating the fake Bruno Mars event. I’m being optimistic and hoping nothing too serious comes from this,” said Alcantar.

“I did get contacted by A.S. while I was still using the fake Associated Students page, but it was only to say stuff like ‘[screw] off,’” admitted Alcantar. “I did get a pretty funny threat from a former A.S. Publicity Coordinator, which dealt with having my fingertips getting cut off.”

Facebook failed to delete the counterfeit Associated Students account as well as the false event that involved over 600 users.

“I’m sure it was just a matter of time. I began getting prompted almost non-stop for captchas after a while so it became obvious that people were reporting my page as fake to Facebook,” said Alcantar.

The proposal for the fake Bruno Mars project can be viewed on Kevin Alcantar’s website. This website includes the concept, execution and results of the project as well as the Facebook comments and statuses regarding the event.