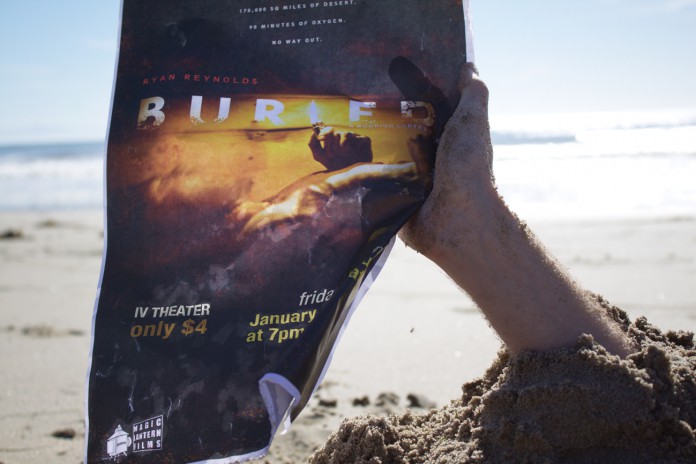 The entire film takes place in a coffin underground, and the audience sees only the buried man for the duration of the movie. The risks involved in creating and marketing this movie make it incredibly interesting to watch. In an era when fast-paced action and explosions are commonly used to capture the attention of younger generations, director Rodrigo Cortes risked failure by choosing to create a film with such a claustrophobic setting.

The first few minutes of Buried set the mood quite effectively as the main character grunts and fumbles in complete darkness until he finds a lighter with which to illuminate his unreal situation.

Matthew Mier, a third-year Statistics major at UCSB, said that Buried was dark and depressing.

“It was like watching a guy die for ninety minutes,” he said.

Despite this, Mier said he really liked the film.

After rummaging around further and finding a cell phone, Conroy begins frantically calling his loved ones to tell them what happened, but he has difficulty contacting his family.

He is finally able to reach federal agents, and explains he had been driving a supply truck in Iraq when terrorists ambushed his convoy. The agent’s words do not reassure him, as the government’s main concern seems to be containing the situation and keeping it away from the press rather than finding and rescuing him.

Kira Martins, a UCSB fourth-year Film Studies major, said that she thought the main message of the film was not to trust the government.

Searching the cell phone’s call history, Conroy manages to contact one of the kidnappers. The kidnapper demands millions of dollars, but the government contacts make it clear that they do not negotiate with terrorists. From this point forward, the protagonist must choose whether to cooperate with the terrorists or to protect the American government’s reputation.
Buried has an original and provocative premise, and it is well-paced considering the static setting. If Conroy had learned the “one inch punch” from Kill Bill, he may have been able to get out of this mess.