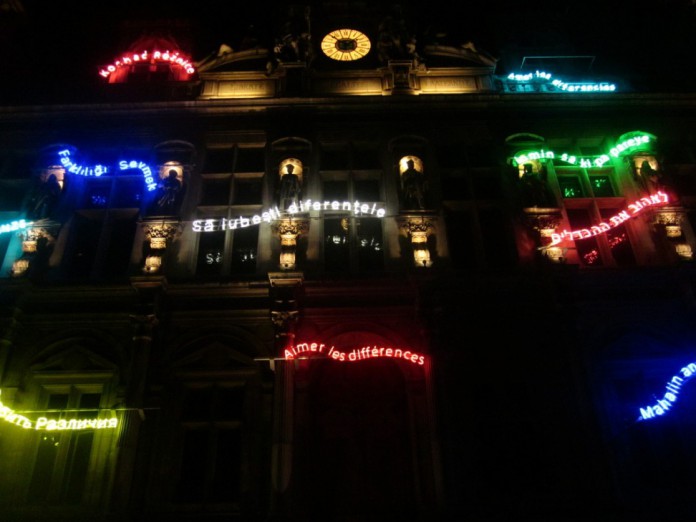 Nuit Blanche, or “White Night” of Paris proved to be as rewarding as the anticipation leading up to the unique cultural tradition that opens all doors to the public for free from 7p.m. to 7a.m. one night a year.

October 2, 2010 marked the fifth year of the annual event which allows Parisians and tourists alike to discover the City of Light by night through a magnitude of music, photography, video, artwork, expositions, performances, and recitals in various building and monuments across three different territories.

Days prior to the Nuit Blanche, 100-page travel-size booklets circulated throughout metro stations to serve as a helpful guide by providing background of featured artists, historical context, locations, descriptions, and significance of the displays.

After a pleasantly quiet and enjoyable meal with my family, who were visiting me in Paris, the ambiance of the evening was cut short as we approached the world-famous Notre Dame, where thousands of people filled the courtyard. As early as 10 p.m. the streets were jam-packed to admire the stain-glass windows lit up for the organ-concert held in the Cathedral.

I then parted ways with my parents and joined forces with a large group of UC students who are also studying abroad. We decided to start in the heart of the excitement and to branch out to the surrounding functions over the course of the night.

Upon exiting the metro, live music flooded the streets as a band played on the balcony of a seven-story building with colorful fabrics blowing in the wind from each windowsill.
After a relatively short wait of twenty minutes, we were welcomed into a completely art-transformed apartment by individuals dressed up in costumes fashioned as the rabbit from the film Donnie Darko. Unaware of what the exhibition entailed,we climbed the first flight of painted stairs and entered rooms filled with drawings, photographs, books, mantras, and everything in between covering the
walls.
No consistent theme permeated the building as we made our way from floor to floor because each piece was different from the next, although equally beautiful and original.
One room featured a single pathway across the floor, with the surrounding space completely decorated with items ranging from birdcages to posters, feathers, light-bulbs, rope, umbrellas, boas, and clothing, among other things while a group of (assumed) artists sat in conversation on couches amidst the clutter.

One friend described the scene as hoarding, making references to how intensely overwhelming it felt, while I found great enjoyment in the unusual display of ordinary objects. Although we had varying opinions on the matter it clearly highlighted the notion that artwork is open to numerous interpretations.

Climbing more stairs brought us to a talented artist’s studio. The artist showed off his craft by picking a random woman and beautifully and accurately painting her face within a matter of minutes. We roamed the seven stories for an hour and a half, taking
our time exploring each of the different facets of the exhibit.

City hall, or “Hotel de Ville,” just one metro stop away from our initial destination, promoted a message of diversity on a multinational level.
Neon lights with the wonderful mantra “aimer les differences,” (“love your differences,”) illuminated the exterior of the building in twenty different languages. This particular installation has been a recurring tradition of Nuit Blanche since 2002 and clearly illustrates the significance in cultural acceptance.

Another display, “Snooze,” featured 300 alarm clocks positioned in a dark room in the Hotel D’Albret. Each clock flashed the present time of 2:30 a.m., only slightly illuminating the outlines of the individuals sitting on the ground watching the minutes change.

We randomly discovered another noteworthy display, titled, “Installation Reflexion?!” upon walking into Church Saint-Paul Saint-Louis.
CDs and thin streamers hung from the center of the ceiling to create a massive, illuminated blue exclamation point. A microphone was positioned underneath the grammatical punctuation for interested singers to take the stage.

The rest of the evening featured installations ranging from steel dinosaurs in courtyards to silk displayed in chapels.

At 7:00 a.m. the alarms of “Snooze,” were set to ring as a concert marking the end of Nuit Blanche, while some buildings provided free breakfast. This “White Night” is a true Parisian traditional event enjoyable for both early birds and night owls alike.