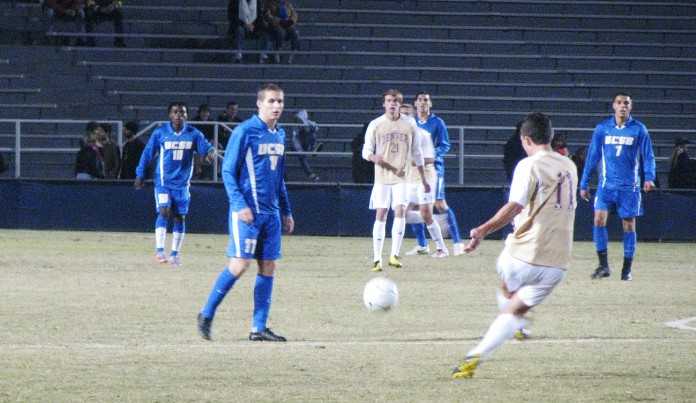 With an estimated two million dollars in upgrades to Harder Stadium for the College Cup, is the athletic department in danger of going over budget and spending too much on the construction of Harder Stadium and Meredith field?

And will the construction be completed before December 10, the first day of the college cup tournament?

Tom Hastings, the Tournament Director, said that the estimated cost of the renovation is around $1.5 million. The upgrades include a new grass field, a portable concession stand, a new ticket office, a new scoreboard, a new entrance walkway and renovations to the press box.

“As a program, this is our chance to fix our stadium, further develop our fan base, and promote that our town loves big events. There are not a lot of times to host a college championship,” Von Steeg said.

This is just the third college championship hosted by UCSB. Both were in Men’s Volleyball, with the first being in 1974 and the second in 1988.

But with less than one month left before the first soccer match, the upgrades are not yet complete. The scoreboard has not been used yet and the entrance is still surrounded by construction fencing.

“The scoreboard is in and up. We are testing it on Wednesday for the first time,” said Hastings.

The scoreboard features all the latest technology, and will have a giant video screen. The board is a massive 62 feet tall, in order to be seen from the opposite corner.

“We tried to get a board that everyone could see,” said Von Steeg.

The original design had the scoreboard on the open end of the stadium, but because the soccer teams practice in that location, the placement was moved closer to the entrance.

“One of the most expensive, but most important aspects for renovation was the press box. Around $80,000 was spent on that renovation. ESPN had certain requirements and we needed to get up to par to even host the cup,” says Von Steeg.

Are these upgrades costing the university money, or just the athletic department?

“Around 85 percent was fundraised, most of that coming from three or four sizable donations. There has also been assistance from other departments, like the concessions stand, that was separate from fundraising,” Von Steeg said.

“That’s the unfortunate reality of college athletics: they are expensive. It could mean cuts in other areas. It’s a risk and the resources at UCSB are very limited,” said former Athletic Director and current UCSB Exercise and Sport Studies Minor Advisor, Jim Romeo.

But the fundraising department sees this as a challenge.

“We will continue to fundraise over the next couple of years to offset any loss and there will be a built-in cost to the athletic department budget for administration fees,” said Von Steeg. “Each of these projects would have been completed in the next five years. It was all needed and necessary.”

So how much money will be taken from future budgets?

“The administration costs will come out of the normal operating budget, but the bulk of it is already paid off,” Hastings says, “and it depends on who is playing.”

“That is the essence of college athletics; I heard that a couple of former Nobel Prize winners couldn’t get into the UCLA game,” Romeo jokes.

But because UCSB lost to CAL on Sunday, November 21, the stadium could be a little less packed.

“It’s a gamble because the students here may not pay the 20 dollars for the tickets,” Romeo said.

The risk seems likely to vary dramatically, depending on the event.

“Twenty-five years ago for the volleyball championship, I know we lost a lot of money. The event center has limited size and it wasn’t a full house because the ticket prices were so high,” Romeo said. “There is very little television money derived from the college cup. It’s on ESPN, but it won’t earn a lot of money.”

That leaves tickets as the last source of income. Hastings estimated that they have sold 5,600 or 5,700 tickets so far but says that most of the tickets will be bought when the teams playing in the tournament are decided.

Von Steeg said that the goal is just to make the stadium look full.

“[The Athletic Department is] banking on our community to come out in full force,” Stumpf said.

Von Steeg estimated that the construction would be completed by the second week of November at the latest, but that time has now passed. It will ultimately come down to the last couple weeks, but the athletic department is not panicking yet.

“It is a public university. Everything on campus takes a while,” said Von Steeg. “You have to fundraise and design it, then there is the three month bid process-all before the construction starts.”

But so far UCSB has been doing all it can to prepare for hosting the College Cup.

“Not a lot of people step up and try to host something like this. Our administration here has to get a lot of credit for hosting it,” Stumpf said.